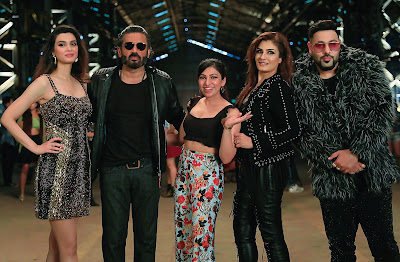 After creating a buzz with her previous songs, Tulsi Kumar has reinvented herself with the recent release ‘Sheher Ki Ladki’ from Khandaani Shafakhana. The 90’s hit track featuring Suniel Shetty and Raveena Tandon, is recreated by Tanishk Bagchi is sung by Tulsi Kumar and Badshah. Giving a modern twist to the song, Tulsi Kumar’s voice gives freshness to the song while Badshah has rendered his voice for the entire song along with his rap. Featuring Diana Penty and Badshah, the song was released last week, and has already gaining love from the audiences and is trending on YouTube since the day it’s launched.

Tulsi Kumar who is riding high on the success of ‘Tera Ban Jaunga’ from the recent massive hit ‘Kabir Singh’ was ecstatic when she got the opportunity to sing Sheher Ki Ladki which needed her to break away and give variations with the vocal quality. Both the songs have added new achievements to her kitty. Both the songs, Tera Ban Jaunga from Kabir Singh and Shehar Ki Ladki from Khandani Shafakhana has become the world’s most viewed videos in the last 24 hours on YouTube. Both the songs have garnered over 80 million views on YT and still counting within no time.

Tulsi says, “Sheher Ki Ladki is an iconic song I have grown up listening to and it's an absolute honor and a huge responsibility to help recreate the magic. Diana and Badshah have done such a fab job in the video.” About her first collaboration with Badshah, who taught her to rap behind-the-scenes, Tulsi says, “Badshah is a powerhouse of talent and a pleasure to work with. We were both asked to understand the vibe of the 90s for this song, and at the same time create a contemporary version using our strengths and I feel Tanishq has struck the right vibe maintaining its old charm and yet offering something new. The bridge of this song is new and there is an excellent rap which Badshah has absolutely aced. This one is really special."

The singer who is a fan of Raveena Tandon feels honored to have lent vocals for the actress. Tulsi Kumar adds, “Raveena – Suniel had made the song iconic in the 90s, and I am so grateful that in my ode to the 90s with the same song they decided to feature in the video.”

Speaking on receiving so much love, Tulsi, feeling humbled says, “It's a wonderful feeling to get all this love from our fans and music lovers. This is love coming from different parts of the globe. It's a huge honor for me and it’s impossible to achieve such a feat without a strong team effort and the love of my fans. It’s an achievement for the entire team."
Posted by PadmaSabari at 01:55