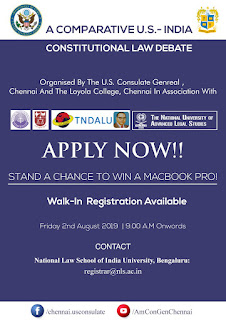 an initiative that will deliberate on contemporary issues in the context of U.S. and Indian Constitutional laws. The preliminary round of the debate contest will be conducted in collaboration with National Law School of India University, Bengaluru on Friday, 2nd August, 9 am,.

Four students will be selected from the prelims who will represent Karnataka for the final competition which  is scheduled to be held in Chennai on September 14, 2019.
Posted by PadmaSabari at 23:37