The Art of Ayurveda

Mrs. Jayadevi Cholayil and Mr. Lasakan Cholayil, from The House of CHOLAYIL, unveiled ‘SADHEV’ The Art Of Ayurveda, on 14th September at The Leela Palace. 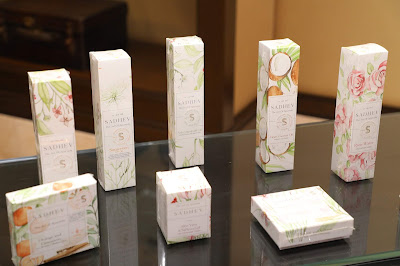 SADHEV brings to you a stunning range of Ayurvedic products to restore natural beauty. Their products treat your skin delicately and with the reverence it deserves.

Available online at www.sadhev.com, Sadhev’s product line is aimed at providing a safe, natural and Ayurvedic alternative to chemical products for everyday use. Our skin is sensitive, and a little support from nature ensures it stays healthy, radiant, moist and youthful. 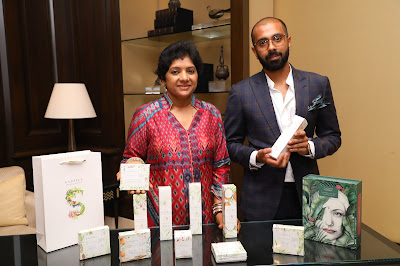 An array of exotic resources for beauty aids, cures and treatments are available with Mother Earth. The secret lies in choosing what we need most. Our ancestors ventured down this path decades ago and handed down their wisdom through the ages. It is this timeless and valuable knowledge that has gone into curating SADHEV for the modern man and woman.

At our 13000 sq. ft. Innovation and Discovery Center, ancient wisdom coalesces with science. A team of Ayurveda Vaidars, Scientists, Cosmetologists and pharmacologists spend hours in product testing and development. This synergy has resulted in body care and beauty products that are exquisite. Our choice of vitalizing ingredients is well-researched, measured and meticulously curated so that you feel the richness and exceptional benefits of Ayurveda.

Sadhev was created by the mother and son duo, Jayadevi and Lasakan Cholayil. A mother who made it her sole mission to care and love the world around her and a son who wanted to create something authentic and aesthetic. The journey began on a car ride to their ancestral home in Vallapad, Kerala. They were going to pay their respects to their forefather for his anniversary. Lasakan was curious to know more about his ancestor and to understand why he played such an important role in his family’s life and path. 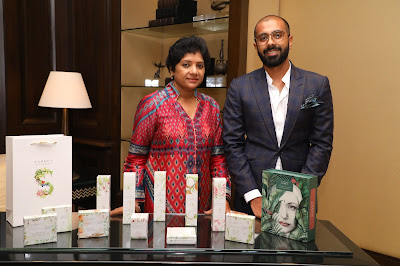 His forefather turned out to be a maverick in Ayurveda’s age old history. He was a physician by trade but was known widely for his natural and unconventional methods of healing. Some even believed he possessed super natural abilities to heal, as he was able to cure diseases that were thought to be incurable during his time.

To pay homage to their forefather, the mother and son duo conceptualized Sadhev. They took his ancient teachings and methods and combined it with a more modern approach both in terms of design and practicality while not sacrificing the authenticity of what Ayurveda truly is - both a science and an art.

Ayurveda is an ancient Indian health care and wellness tradition that dates back to 1000BC. The Hindu God of Ayurveda, Sri Dhanvantari (a Vishnu avatar) incarnated as a human and taught medicine to physicians. This was the start of Ayurveda. The word is derived from Ayur (life) and Veda (knowledge). This knowledge was originally documented in the Vedas, and with time it has evolved to become a part of wellness therapies in modern times.

Sadhev brings to you this time-honoured tradition of Ayurveda into everyday life.

Our story was born of miracles and dates back to many years ago at the start of the 20th Century. Brahmasree Cholayil Kunju Maami Vaidyar was a physician who administered treatments that were not only natural but also unconventional. His cures were based on Ayurveda. He was a maverick, well-versed in all eight divisions of Ayurvedic treatments, i.e. daivam, siddham, manusham, paishacham, rakshasam, prakruthom, bhouthikom and manasam. He was intuitive in his methods and careful in its application. Many tales have been told of his ‘miracle cures’. He always had an answer for any type of disease from a stomach ache to tuberculosis. He was more than just a medicine man, many believed he was a guru blessed with special powers to heal. There have been very few like him and none quite so bold and radical in embracing natural cures. His knowledge has been handed down for generations and his texts are still used to lead many Ayurvedic institutions today.

It is in Brahmasree Cholayil Kunju Maami Vaidyar’s wisdom and courage that Sadhev has its roots.
Ayurveda has been the centerpiece of the Cholayil family for three generations now. At the heart of it is the 80-acre Ayurvedic research facility that focuses only on the growth of specific herbs that can be used in medicinal formulations.

Sadhev brings these formulations to life with an authentic and an exotic range of handcrafted luxury Ayurvedic products forged through age-old traditions, modern science, exquisite ingredients and luxury to enrapture your mind, body and soul.