heartwarming gesture from his film 'Chehre' producer Anand Pandit. This date is an iconic date for all Indians 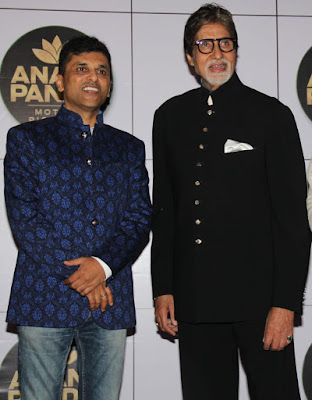 Veteran producer Anand Pandit’s friendship with Big B goes a long way back and his love and respect for the actor
are well known within and outside Bollywood circles. For the evergreen actor’s 77th birthday, the producer found
a unique way to surprise him. Keeping it a surprise right till the D-day, Anand Pandit has got a special video
collage made with photographs of at least a hundred of the memorable characters portrayed by Amitabh
Bachchan. The video ends beautifully with iconic photographs morphing into Big B's character look for his
upcoming film 'Chehre'. This message was played at least 60,000 times in theatres across the country.

“There is no one like Mr. Bachchan. Even before I met him, I was a dedicated fan and admired his work. When I
met him and grew to known him, I came to admire the superlative human being that he is. We at Anand Pandit
Motion Pictures felt that his birthday is the best time to reflect on his incredible body of work and the range of
characters that he has portrayed on screen, says Anand Pandit adding “This little effort from our entire team of
'Chehre' is a tribute to wish the superstar who has impacted all of us in unimaginable ways throughout his
illustrious journey. And we hope to celebrate many more occasions with the legend.".

thriller Chehre, a mystery thriller with Amitabh Bachchan and Emraan Hashmi in lead roles. The film is directed

Releasing in February 2020. Incidentally, Pandit is also working with Abhishek simultaneously in The Big Bull

which he is producing with Ajay Devgn.
Posted by PadmaSabari at 03:05