The entire team of ‘Sinam’ is drenched in showers of high-spirits as the versatile filmmaker Maniratnam has unveiled the first look of ‘Sinam’. 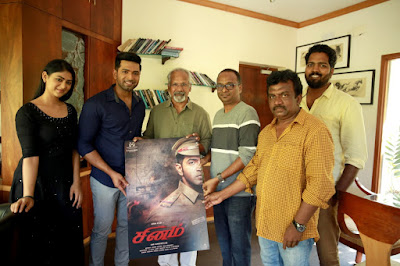 Actor Arun Vijay says, “This is something more than I asked for and a bigger birthday bonanza beyond my imaginations. To have the legendary filmmaker Mani Ratnam sir launch the first look of my film is a huge blessing and I strongly believe is an additional positive vibe to the movie. Working in his directorial for ‘Chekka Chivantha Vaanam’ was an incredible experience, where it gave me the space to unlearn and acquire new traits of performances. While 2018 gave me such an amazing birthday, the magic repeats with his Midas-touch for ‘Sinam’, which is surely a big curtain raiser of attraction for our entire crew.”

Sharing his insight about the film, Arun Vijay adds, “As I have already mentioned, it’s about the premise of how ‘Anger’ in a cop pushes him ahead breaking the barriers and fight for justice. It might be a prototyped statement, but the way GNR Kumaravelan had narrated and shooting it is filling me with excitements.”

The actor’s birthday was celebrated in a much grander and emotional way on the sets of “Sinam”. The occasion had the presence of his father Vijayakumar, mother, wife, kids and sister Preetha along with ‘Agni Siragugal’ director Naveen  as well. The film’s producer T. Siva of Amma Creations gifted him a gold chain. Director Arivazhagan and producer Vijay of All In Pictures were also present to wish Arun Vijay.