MGM Healthcare, a super-specialty quaternary care hospital in the heart of the city, today announced the successful completion of its first heart and lung transplant. The 4-hour-long procedure was led by Dr. K. R. Balakrishnan, who recently took charge as the Chairman & Director of Cardiac Sciences and Director of the Heart and Lung Transplant Program at MGM Healthcare, and his team of transplant specialists including Dr. Suresh Rao K. G., Dr. Srinath V. and Dr. Ganapathy Subramaniam. 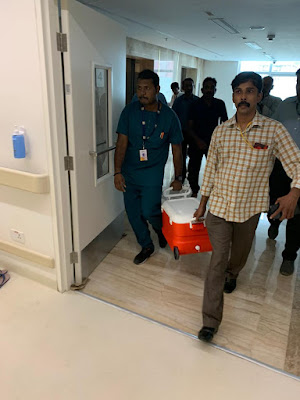 The transplant was performed on a 16-year-old boy from Karnataka.

MGM Healthcare received an alert in the wee hours of the morning about a 41-year-old brain dead male patient (Blood Group: O+ve) at a private hospital in Coimbatore, who was an organ donor. The cause of brain death was reported to be a Subarachnoid Hemorrhage (SAH), a life-threatening type of stroke caused by bleeding into the space surrounding the brain.

MGM Healthcare immediately confirmed the requirement. The 16-year-old boy was diagnosed with a congenital cyanotic heart disease with severe pulmonary artery hypertension with a single ventricle. His family had visited major hospitals across the country in the past but doctors were unable to help him. When he came to Dr KR Balakrishnan, he was found to have bleeding in the lungs and was put on ECMO, a life-saving advanced intensive care technology, on October 22, 2019. It was declared that the heart and lungs was beyond repair and he would need an immediate heart and lung transplant if he was to have a fighting chance.

The boy was already registered on the waiting list handled by National Organ and Tissue Transplant Organisation (NOTTO). Post registration, he was waiting for a suitable donor. Once the deceased patient in Coimbatore was identified based on medical compatibility, the recipient was informed about the possibility of a transplant taking place.

The respective Traffic Police Departments in both Coimbatore and Chennai opened ‘Green Corridors’ for road travel from the private hospital in Coimbatore to Coimbatore Airport; and from Chennai Airport to MGM Healthcare. The organs landed in Chennai at 12:00 noon and were given priority exit from Gate 6. The ambulance with the organs reached MGM Healthcare from Chennai Airport in 18 minutes flat, which under normal traffic conditions would have taken anywhere between an hour to an hour and a half to cover.

Speaking on the occasion, Dr. Prashanth Rajagopalan, Director, MGM Healthcare said, “With cutting-edge technology, advanced facilities and top-notch clinical expertise, it is no wonder that in just a short span of a few months, our hospital has seen over 25,000 patients, performed over 800 surgeries, including 3 renal transplants. And today, we perform our first heart-lung transplant. It’s indeed a proud moment for MGM Healthcare; an instance where various state machineries including the Traffic Police Department, Airport Authorities and last, but not the least, the common man commuting on the city roads who gave way for the heart and lungs to reach us fast, became an integral part of our ‘Healthcaring Movement’. I would like to take this opportunity to thank each and every one who supported us in giving a fresh lease of life to the young boy.”

For more details on cardiac care and / or heart & lung transplants, one may reach out to MGM Healthcare at +91 44 4524 2424 or customerconnect@mgmhealthcare.in.