When it comes to creating great music and innovative ideas, there's no music label even close to Bhushan Kumar's T-Series. The channel is the most viewed one on YouTube globally and T-Series songs are sure to rake in over 100 million views on a regular basis. The team had introduced a smart but soothing concept of MixTape where they get two singers crooning unplugged Versions of two songs blended into one track.

For the latest episode of MixTape Punjabi season 2, produced by Bhushan Kumar and presented by Amazon Prime Music, T-Series has now got singers Jonita Gandhi and Meet Brothers together for an upbeat and groovy MixtTape on songs Baby Doll from Ragini MMS 2 and Chittiyan Kalaiyan from Roy. With Jonita and Meet Brothers behind the mic, the music video has been directed by Radhika Rao and Vinay Sapru. 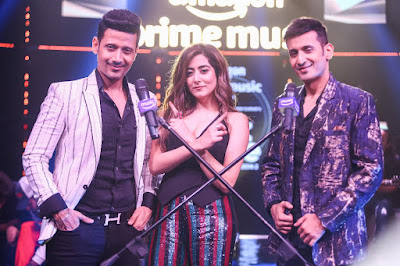 Sahas Malhotra, Director, Amazon Prime Music, said, “We are excited about the tremendous response and interest shown by our listeners in the recreated Bollywood songs with a new twist. To keep delighting our Prime members, we bring yet another all-new episode featuring two popular and foot-tapping tracks by Jonita Gandhi and Meet Bros’ mixtape of Chittiyan Kalaiyan and Baby doll. This will be available ad-free and exclusively first on Amazon Prime Music.”
Jonita shares, "MixTape Punjabi season 2 has a very different vibe from the Hindi mixtapes that I have been part of. This one is lovely and it was a blast to shoot for. I'm excited to bring out my Punjabi side this time around because most people don't know I'm Punjabi." She further adds, "When you're mashing up two songs that are so well-known, it's hard to forget the original structures and embrace a new one. But the more people listen to ourfresh mash up, the more natural the new structure will feel."

Meet Bros says, "This is the first time we are doing mixtape and we wanted to start it off with our two iconic tracks that got us recognition and popularity. They were T-Series songs in Punjabi and these were the songs after which Punjabi songs started getting more popularity in Bollywood. They
were a huge hit worldwide and although Kanika couldn't do it, we had Jonita joining us and we gave a different spin to this version."

Vinay Sapru, the director, finally adds, "The episode needs to be seen for the sheer coordination between the two artists when they are coming together and performing with each other. They gel with each other as if they have composed it originally. They are spontaneous. Jonita is a very South Bombay kind of an artist and she's singing Baby Doll where the lyrics might not befolk but the instrumentation definitely is. She's given a very urban approach to the song. Meet Bros are these modern Punjabi boys who are bringing desi mitti ka gaana. So the combination has been amazing."