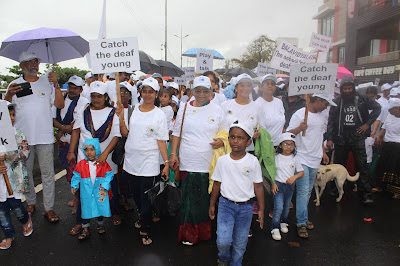 Over 500 participants took part in the Walkathon Organised by Balavidyalaya The School for Young Deaf Children to Create Awareness On “Early Identification and Intervention of Deafness in Children”. The awareness Walkathon was held today at Elliot’s Beach, Besant Nagar where families, children, students, teachers and Alumini of the school and the local community participated. 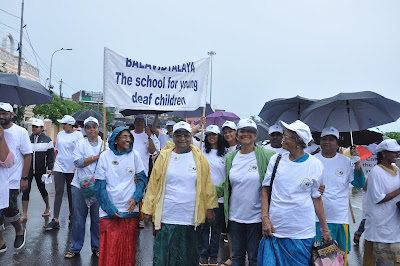 The Walkathon organized as a part of the 50th Anniversary Celebrations of Balavidyalaya The School for Young Deaf Children was inaugurated by Mrs. Saraswathy, Honorary Director, Balavidyalaya.
Inaugurating the Walkathon, Mrs. Saraswathy, said, “Around 360 million people- 5% of the world’s population- live with hearing loss which is considered disabling. Of these, nearly 32 million are children, with the majority living in low- and middle-income countries. If hearing loss is detected early enough, and if children receive the care they need, they can reach their full potential.” 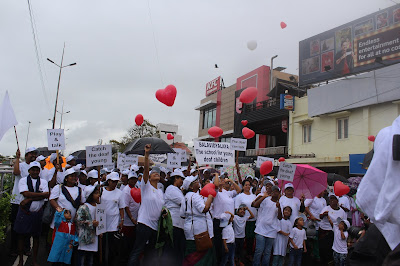 She also added, “For children, hearing is key to learning spoken language, performing academically, and engaging socially. Hearing loss poses a barrier to education and social integration. Such children with hearing loss can benefit greatly from being identified early in life and offered appropriate interventions. Balavidyalaya The School for young deaf children is a nonresidential, private and nonprofit voluntary (free) educational center for babies and pre-school children. We have helped more than 1200 children with hearing disability develop language and speech.”
Following the Walkathon, Balavidyalaya is also organizing a two day International Conference on “PARENTING CHILDREN TO LISTEN FROM INFANCY & TALK FOR A LIFETIME” on 19th and 20th December 2019 as part of the Golden Jubilee Celebrations. The conference will bring together policy makers, special educators, speech therapists, audiologists, doctors, psychologists, social workers and parents engaged in the field of deafness.
Posted by PadmaSabari at 01:56