National Institute of Technology Tiruchirappalli, in association with the REC Alumni Association, celebrated the Golden Jubilee Alumni Meet for the first batch of alumni that graduated from the then-REC Trichy in the year 1969.REC Trichy then was only 120-student strong, and the infrastructure consisted only of a single Hostel, a partially built Mechanical Block, a Mess, and a few staff quarters. The hostels weren’t named at that time, they were named after gemstones only after nine hostels were built. 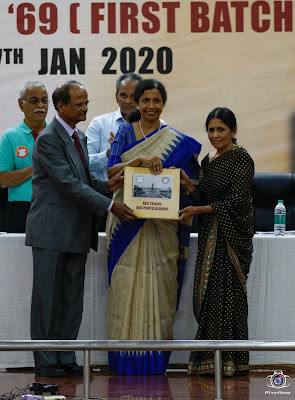 The event began with an Invocation song by Meera (B.Tech IV - Civil), after which the host for the day Dr Vinod Balakrishnan requested everyone to pay their respects to the deceased souls, including
professors who taught the batch of '69, and the batchmates of the alumni.

A few notable alumni delivered speeches congratulating their fellow batchmates who have gone and achieved great successes, while also revisiting their college life through many anecdotes and stories that
inspired the young students seated in the audience. Notably, Vice Admiral Kalyan Krishnan shared a few instances of his journey through REC Trichy and the seeds that were sown in him by the professors and mentors that have taught and guided him.

The Director, Dr Mini Shaji Thomas, then gave her address to the gathering and informed the alumni of how far REC Trichy has come since their graduation, now under the name NIT Tiruchirappalli, an Institute of National Importance that ranks consistently among the top engineering institutes in India.

Following this, there was a distribution ceremony where a digital record of pictures taken during the alumni's time in college was presented to the members of the dais. The digitised photos were
returned to the family of the first principal of RECT, who had meticulously collected and stored the photos taken during his tenure as Principal for 18 years. A memento distribution followed, wherein
the institute memento was distributed to the alumni.

The 1969 batch made the first contribution of Rs.10 lakhs for the proposed Heritage Centre in the College. The 1969 batch had presented a ship model donated by Mazagaon Dock to the institute on account of Republic Day, on 26th January 2020.

On conclusion of the ceremony and post-lunch, an interactive session was organized, during which a few alumni interacted with students currently studying in the college. Alumni answered various questions, prominently regarding engineering and their careers.

The interactive session ended with a scholarship distribution ceremony for awardees of the RECAL Scholarships, grants that are given to extraordinary students who are currently studying in NIT
Tiruchirappalli.
Posted by PadmaSabari at 01:19