Vanakkam from Tokyo Tamil Sangam. We thank all media people for the co-operation rendered to us in our first attempt to pay tribute to CrazyMohan on his first death anniversary along with Crazy Creations recently.

We all are emotionally disturbed by the outbreak of corona. In an attempt to come out of the trauma, as a small attempt with the help of World Tamil Associations it has been proposed to honour veteran film personality Gangai Amaren. It will be a musical special with everlasting songs to be rendered by singers from across the globe. We request your co-operation for making this a success.
Thanks
Ganesh Hari Narayanan
Tokyo Tamil Sangam
@@@@@@@


As part of World Music Day, in association with World Tamil Associations, The Legend Gangai Amaren will be honoured by Tokyo Tamil Sangam and Malaysia Tamil Expats 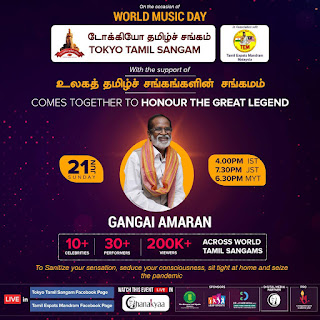 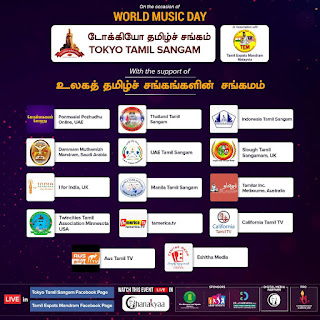 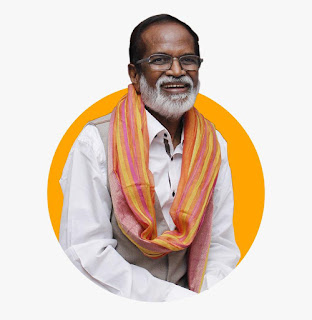 Began his musicsl journey with Ilayaraja in 1975 with Annakili, Gangai Amaren has penned lyrics for over 2500 songs, directed 17 films, composed music for 150 movies, acted in over 50 flicks and produced four movies. He has created history by successfully conducting more than 1000s of Concerts across the Globe. In a bid to honour the man with many achievements, Tokyo Tamil Sangam's Ganesan Hari Narayanan, Malaysia Tamil Expats and 30 Tamil Associations from around the world are planning a mega celebration on 21st June that happens to be World Music Day.
This is an attempt to provide some relief to millions affected emotionally following corona outbreak. It is aimed at giving them some comfort.

Gangai Amaren, a man who with his 45 years of association with film industry in various capacities will be honoured.

It is a live musical extravaganza. A boon to adorn the crown of music on Gangai Amaren for his great contributions.