Mumbai, Maharashtra
We live in a world of chaos. While humans strive to move forward, planning and dreaming each move of their life, while collectively pulling the society with them, certain forces try to hold them back. They thrive in darkness and these forces have surrounded us all. These forces have infiltrated and taken control of the streets, the police forces, the Government agencies and there is absolutely nothing you can do to stop them. Produced by Gayatri Suresh, “QUOTATION GANG” is NOT a new story, because it encapsulates many of the real incidents you may have read and attempts to provide a fresh outlook into this dark and mysterious force. 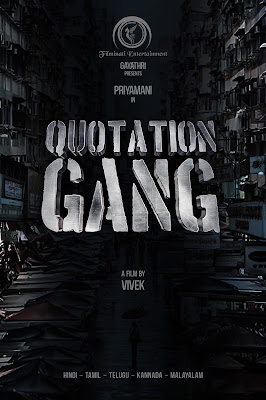 Director Vivek has a very unique and innovative approach to this story, a virtue he picked up from his time assisting veteran Tamil director and national award winner BALA, known for his unique style and subjects. Filminati Entertainment have also recently acquired the rights for Hindi remake of many titles like MIRAPAKAY, SRIMANNARAYANA AND PAISA along with Ramesh Puppala. Mars entertainment will also be collaborating with this budding new film house in the production of this outright thriller film.

Having carefully handpicked an ensemble of cast featuring National Award winning actress Priyamani as the main lead and many other familiar faces like Isai Priya fame Dhanya Rafia Banu, Red Rain fame Vishno Warrier and Zee fame Akshaya, the film is blessed with talents who have proved their caliber. Apart from them, the producer and director duo are yet to reveal the name of a major star who has agreed to play a vital character in this movie, although they have promised to unravel the identity of this Bollywood star during their Social Media campaign, where exclusive details, inside news and posters of the film will be posted over a period of one month, starting from the  7th of September. So better watch out if you don't want your FOMO to act out!

The filming of this bone chilling gritty crime thriller is expected to be pan India with Mumbai, Tamil Nadu and Andhra Pradesh being the major locations and will feature stories based on true incidents and characters based on real hitmen who are bound to keep you awake at night and rightly so!
Posted by PadmaSabari at 05:03