“Indian Naval Ship Kavaratti”, the last in the series of four Anti-Submarine Warfare Corvettes’ (ASWC) built for the Indian Navy by Garden Reach Shipbuilders and Engineers Limited (GRSE), Kolkata, a Mini Ratna Category 1 & leading shipyard of the country, under Project 28, was commissioned today. GRSE had delivered this weapon-intensive platform to the Indian Navy in February this year.

INS Kavaratti was commissioned at Visakhapatnam by the Chief of the Army Staff, General MM Naravane, PVSM, AVSM, SM, VSM, ADC, in the presence of Rear Admiral VK Saxena, IN(Retd), Chairman & Managing Director, GRSE, and other senior officials of the Indian Navy. Commissioning of the ship while braving constraints of COVID-19 highlights the determination and commitment of the Indian Navy, GRSE and other stakeholders in strengthening the maritime security of the nation. 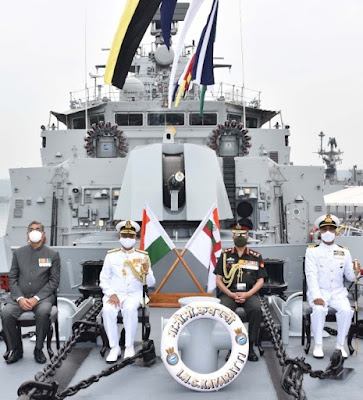 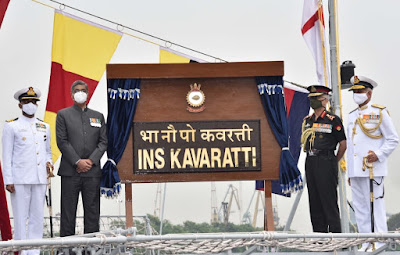 The timeline of the P28 class of ships built by GRSE was synchronized to factor in the first-time unique indigenization efforts. Special High Strength Warship Grade Steel Type DMR 249 A, was indigenously developed for these ships’ construction. INS Kavaratti and INS Kiltan are the first two major warships in the country to have the unique feature of Superstructure made of Carbon Fiber Composite Material. GRSE is the first shipyard in the country to have successfully achieved this feat, wherein composite material has been integrated with the steel hull of these two ships. This new age material, has led to an overall reduced weight which in turn led to significant speed/ maneuverability improvements and increased stability of over 20%.

Strategic innovation and indigenization are at the heart of the first three Anti-Submarine Warfare Corvettes built by GRSE. These potent platforms demonstrated their expertise in several Overseas Operations and International Maritime Exhibitions. INS Kavaratti commissioned today is expected to follow suit. Equipped to fight in Nuclear, Biological and Chemical Warfare conditions, featuring the integration of a host of weapons and sensors, the P28 Class of ships are a milestone in the journey towards “Atmanirbhar Abhiyaan” of the Government of India.

These ships are designed to be equally effective in the littorals as well as the deep oceans. INS Kavaratti is a versatile Anti-Submarine Warfare platform, 109-meter-long, 14.1-meter-wide and a deep displacement of approx. 3250 tons. With a maximum speed of 25 knots, and an endurance of over 3400 NM at 18 knots speed, the ship can accommodate 17 officers and 106 sailors. This dominant platform is utilized for neutralizing enemy submarines by using weapons like torpedoes, rocket launchers and helicopters. The design with an indigenous content of over 81%, was achieved in house by the Directorate of Naval Design and GRSE while the hull of the ship was developed by DRDO and Indian Navy. The “X” form of the Hull and Super Structure gives very Low Radar Cross Section and the special design of propulsion system minimizes Radiated Underwater Noise. The Stealth features make the ship nearly undetectable to the enemy both above and below the sea surface.

GRSE is currently executing three major shipbuilding projects, namely the P17A Project for 3 Advanced Stealth Frigates, 4 Survey Vessels (Large) and 8 Anti-Submarine Warfare Shallow Water Crafts. The shipyard plans to deliver the last ship of the LCU Class by this yearend and the 1st P17A Ship is expected to be launched in Dec this year, well ahead of schedule. GRSE delivered the Fast Patrol Vessel ICGS Kanaklata Barua in June 2020, in the face of challenges in operating in a manpower-intensive industry during pandemic times. GRSE has a strong order book of Rs 26,544 crores as of 31st Mar 2020. The COVID-19 pandemic has triggered innovation in terms of working style for the shipyard. GRSE’s strategies revolve around shifting to smart manufacturing or Industry 4.0 with innovations in Automation, Robotics and the Industrial Internet of Things. A state-of-the-art Modern Hull Block Complex and Indigenous Underwater CNC Plasma Cutting Facility were virtually inaugurated by the Hon’ble Raksha Mantri Shri. Rajnath Singh at the RBD Unit of GRSE, to augment the existing infrastructure at the Main Unit of the Shipyard.