Bahubali director SS Rajamouli’s next film, RRR, is already creating waves all across India. The film will see, for the first time, two of the biggest superstars, Ram Charan and Junior NTR, on the screen together. And this is not just a treat for the Telugu audience. Since the film will also be released simultaneously pan India in Hindi, the excitement for it is unprecedented already. 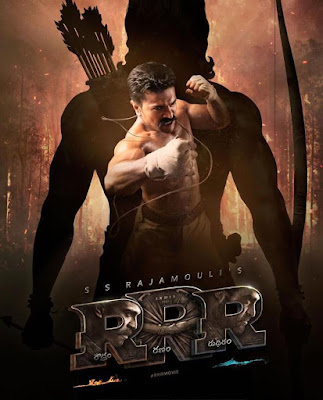 Audience curiosity is at its peak right now since the film’s new teaser is all set to release tomorrow in all the languages. Telugu cinema’s ‘Mega Power Star’ Ram Charan (who plays the role of Ramaraju) in the movie will be introducing Junior NTR’s character, Bheem, to the audience.

Ram Charan fans are waiting with bated excitement to see the superstar lend his voice in the teaser.

One of the biggest highlights of the Hindi teaser is the fact that Ram Charan has dubbed himself in Hindi for the same.

The new teaser, which is titled #RamarajuForBheem, is the second one to be released. Earlier in March this year, the makers had released the first teaser, which was titled #BheemForRamaraju, in which Junior NTR had lent his voice for Ram Charan’s introduction. The teaser was a spectacular success as fans saw a glimpse of Ram Charan on screen.

For all those who missed out the euphoric hysteria of the first teaser (introducing Ram Charan), here it is: