The Hon’ble Union Minster for Petroleum & Natural Gas and Steel, Shri Dharmendra Pradhan today through a Video Conference from Delhi, dedicated 42 CNG stations and 3 City Gate Stations (CGS) of Torrent Gas to the service of the community. The CNG stations are located across various states, including 14 in Uttar Pradesh, 8 in Maharashtra, 6 in Gujarat, 4 in Punjab and 5 each in Telangana and Rajasthan. The City Gate Stations include one each in Uttar Pradesh, Maharashtra and Punjab. 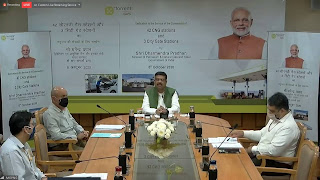 With the completion of these 42 CNG stations, Torrent Gas has achieved a major milestone of commissioning 100 CNG stations, within a short span of time. Torrent Gas, which has the authorisation to lay City Gas Distribution (CGD) network in 32 Districts across 7 States and 1 UT, is one of the fastest growing CGD entities amongst its peers, and is growing both organically and inorganically. Very soon Torrent Gas will make CNG and PNG available in Chennai, the only metro city where CNG and PNG are not available.

By March 2021, Chennai and Thiruvallur districts will have 30 CNG stations.

Specially appreciating the speed at which Torrent Gas is setting up the CNG stations and creating CGD infrastructure in the country, Shri Dharmendra Pradhan said, “This achievement of Torrent Gas is specially praiseworthy, as it has achieved the milestone of 100 CNG stations within a short span of less than two years and is worthy of emulation by others. Making Natural Gas available in upcountry regions, will encourage consumers to adopt this cleaner and cheaper fuel, thereby having a positive impact on the environment and benefiting the citizens at large. Government of India intends to increase the number of CNG stations in the country from approximately 3,000 currently to 10,000 within the next 4 to 5 years. The CGD industry has a key role to play in creating the next generation gas infrastructure as envisioned by Hon’ble Prime Minister. The Government of India is taking various steps to give a further impetus to the CGD industry and is making gas available at an affordable price to the common man”.

The Hon’ble Minister took this opportunity to call on CGD companies to become comprehensive energy retailers and digitise their services as well as payment systems so that energy can be delivered at citizen’s door steps in the coming days. He also emphasized how digitisation in energy sector can create employment, reduce import dependency and make way for 'Atmanirbhar Bharat'.

Speaking on the occasion, Mr. Jinal Mehta, Director, Torrent Gas said “Torrent Gas is committed to its mission of making CNG and PNG widely available in the country and thereby contributing to the Government of India’s vision of increasing the share of natural gas from 6.2% to 15% of the Indian energy basket by 2030. The widespread availability of natural gas is expected to contribute towards the socio-economic development of these regions. Torrent Gas intends to make a total investment of Rs 8,000 crores (USD 1.1 Billion) over the next 5 years towards the creation of CGD infrastructure in the country, of which Rs 1,050 crores has already been invested.  Despite the constraints presented by the COVID-19 pandemic, Torrent Gas has been able to set up 100 CNG stations within a relatively short span of time. We are now working towards our near-term goal of setting up 200 CNG stations by March 2021 and medium-term goal of setting up 500 CNG stations by March 2023, apart from making PNG widely available to industries and residences in our authorised areas”.
Posted by PadmaSabari at 03:50