LANDMARK DAY AT CSL LAUNCHING OF FIVE VESSELS AT ONE GO 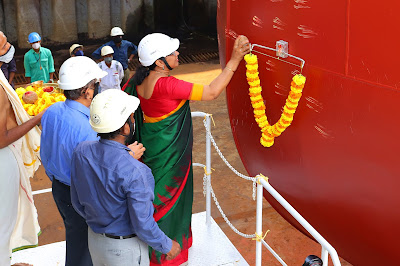 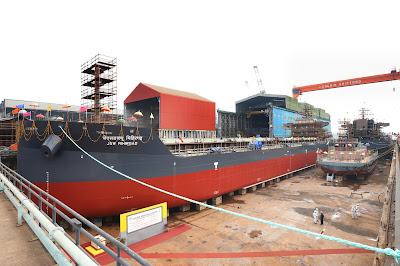 The Mini General Cargo Ships launched today are part of a series of four similar ships being built for the JSW group. These vessels are built and classed under the standards of Indian Register of Shipping. These ships will be used for transportation of dry bulk cargo such as coal, iron ore, dolomite, and limestone. The vessels, with a length of 122 Mtr and height of 7.20 Mtr and speed of 10 knots, will have a compliment of 16 crew. These ships are expected to ply on the Coastal route between Jaigarh Port and Dolvi Steel Plant in river Amba near Dharamtar Port. This programme, once implemented, would trigger one of the largest inland water transport cargo movements in India, which is in line with the Government of India’s vision for the development of the National Waterways.

The three FBOP’s, with a length of 46 Mtr, launched today are part of a series of nine vessels being built for the Water Wing of the Border Security Force. These vessels are designed in-house by CSL & classed by Indian Register of Shipping. Each FBOP is designed with stowage arrangements for four fast patrol boats, which can be launched and hoisted using its own davit system. The vessels will act as a floating base for the flotilla of fast patrol boats and will supply Petrol, Fresh Water and provisions to the smaller boats and are to be deployed on India’s Eastern & Western borders.

CSL is expanding geographically and has commenced Ship Repair Units at Mumbai, Kolkata & Port Blair in addition to its Kochi facilities. CSL is also setting up fully owned subsidiary shipyards at Kolkata (named HCSL) and at Malpe, Karnataka (named TEBMA Shipyards Limited) to cater to the construction of small & medium vessels as well as inland water vessels.

CSL is also augmenting its infrastructure in Kochi and is currently investing around ₹2,800 Crore in the construction of a new 310 M long dry dock at CSL and a ship lift based Ship Repair Yard at Willingdon Island, Kochi.