~ The blockbuster has received rave reviews from audience and critics; and has been lauded for power packed performances by Nayanthara and Urvashi ~ 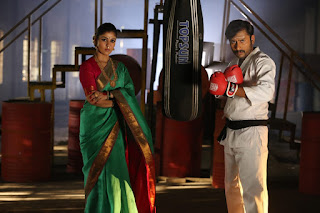 18th November 2020, Chennai: With a powerful storyline and memorable characters, Tamil movie Mookuthi Amman starring Nayanthara and RJ Balaji is off to a divine start! Released as a Diwali special, the opening night of the movie has emerged as Nayanthara’s biggest opening movie ever and has overnight become the most-watched Tamil movie on Disney+ Hotstar VIP. With love and adulation pouring in across social media platforms, millions of netizens and critics have lauded the movie for its high entertainment quotient. Mookuthi Amman has been directed by RJ Balaji and N.J. Saravanan, and also features celebrated actors Urvashi, Ajay Ghosh and Moulee.

Actor and Director - *RJ Balaji* said, “When we started working on Mookuthi Amman, we wanted the movie to reach as many people as possible and, with its release on Disney+ Hotstar VIP today that dream has become a reality. Comedy is tough especially when the focus of the story is much bigger and deeper; and it seems that audiences have responded well to the movie. On behalf of the entire team of Mookuthi Amman, I would like to thank all fans for welcoming us into their homes on Diwali and making this movie such a great success”

Mookuthi Amman is a family entertainer about an ambitious reporter Engels Ramasamy (RJ Balaji) who meets his ancestral deity Mookuthi Amman (Nayanthara) and the latter's intriguing plea transforms the life of Engels & his family. The movie was also released in Telugu as Ammoru Thalli.

Disney+ Hotstar VIP subscribers get the best of entertainment and LIVE sporting action. With an annual subscription of Disney+ Hotstar VIP viewers can enjoy LIVE sports, along with mega blockbuster films that have directly released on the platform like Laxmii, Dil Bechara, Lootcase and more, exclusive Hotstar Specials shows in seven languages like Special Ops, Aarya, Hostages S2 and the best of global SuperHero movies dubbed in Hindi, Tamil and Telugu and much more.