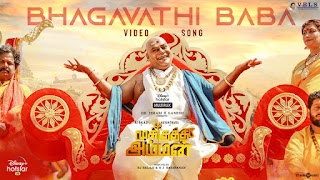 *'Bhagavathi Baba'* song establishes the character of the veteran actor Ajay Ghosh who will be seen playing the antagonist in the film. The song gives us a glimpse of how Ajay Ghosh character with his antics will cheat and con people.

The song has been composed, arranged and produced by Girishh Gopalkrishnan and sung by Anthony Daasan.

Mookuthi Amman is written and directed by RJ Balaji and NJ Saravanan. The film stars Nayanthara and RJ Balaji in lead roles.

Produced by Ishari K Ganesh under his banner Vels Films International, Mookuthi Amman features Urvashi, Ajay Ghosh, Mouli, Smruthi Venkat in pivotal roles. Girishh Gopalkrishnan has scored the music of the film, which will stream on Disney+ Hotstar VIP on 14th November as a Diwali special.