The Chief Minister of Goa, Dr. Pramod Sawant inaugurated the first public Electric Vehicle (EV) charging unit today, as part of the Green Goa Initiative. The EV charger has been installed by Convergence Energy Services Limited (CESL), a wholly owned subsidiary of Energy Efficiency Service Limited (EESL) at the Assembly Complex of Goa Legislative Secretariat. It is a 142 KW fast charger and is first among the 12 public EV chargers to be set up by CESL. The Chief Minister also flagged off two Electric Vehicles — a Hyundai Kona and a Tata Tigor from Goa Legislature Secretariat, Assembly Complex, Porvorim. 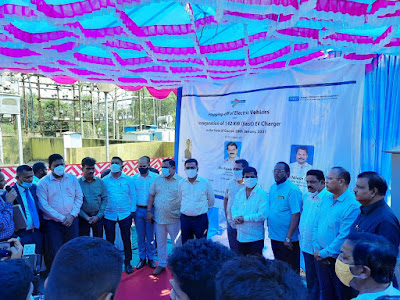 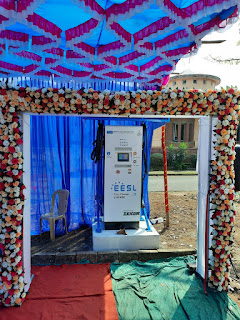 Speaking on the occasion, Dr. Pramod Sawant, Hon’ble Chief Minister of Goa, said, “The Goa government is hoping to set an example for the nation by emerging as a frontrunner in electric vehicle standards. Statistics have shown that with the rise in the number of vehicles in the state, there has been a rise in the air pollution levels. If pollution is to be reduced, it is necessary to move to electric vehicles. With this collaboration, I hope we will be able to meet the charging infrastructure requirements of the state. I congratulate CESL for this initiative and hope that other states too come forward to boost EVs and EV charging infrastructure.”

Speaking on the occasion, Shri. Nilesh Cabral, Hon’ble Power Minister of Goa, said, “The Goa government has an agreement with EESL for deploying EVs to Govt. departments and developing infrastructure for charging the Electric vehicles wherein CESL is the implementing agency. I congratulate CESL on the successful commissioning of Goa’s first public EV charger.”

Shri Kunal, IAS, Secretary (Power and New & Renewable Energy), Goa said, “The charging units, with its compatibility with a wide range of electric vehicles will greatly spur e-mobility adoption. It will go a long way in making EV charging hassle free and convenient for the consumers, thereby making e-mobility adoption an attractive proposition across regions in the country.”

Ms. Mahua Acharya, CEO & MD, Convergence Energy Services Limited (CESL), said “Adoption of EVs for daily commute is essential for a wide range of goals, including better air quality, enhanced energy security, transition to clean energy sources, along with reduced greenhouse gas emissions. With vehicular pollution being a persistent source of reduced air quality within the state, rapid adoption of zero emission vehicles is of great importance and so is the deployment of proper EV charging infrastructure.”

Shri Parimal Rai, IAS, Chief Secretary of Goa said, “Goa’s policy has been to provide for world-class infrastructure and ecosystem for electric vehicles. The government aims to have charging stations every few kilometres on the highways and within city limits. The agreement with EESL will encourage faster adoption of EVs in the state.”

So far, three high-capacity combo EV chargers of 122-150kW, Type 2 AC standards have been installed that can charge long range EVs like Hyundai Kona, Tata Nexon, and Maurice Garage (MG) EV variants. Adjoining to these EV chargers, Bharat Standard DC001 EV chargers are planned for recharging moderate range EVs such as Tata Tigor and Mahindra e-Verito. This shall be completed by February 2021.

The establishment of EV charging units is part of the agreement signed between EESL and Goa Energy Development Agency (GEDA) on November 6, 2020. CESL has been anchoring the Electric Vehicles eco-system development in the country, undertaking demand aggregation for procuring EVs and supporting the transition in bringing innovative business models and implementation wherewithal for accelerated roll-out of EV charging units.