Film to release worldwide on May 13*

Our tradition believes in 'Acharya Devo Bhava'. For a change, Megastar Chiranjeevi is saying 'Acharya Raksho Bhava'. If you want to know why the beloved actor is saying it so powerfully, you have to watch 'Acharya', the team of the most-awaited movie says. 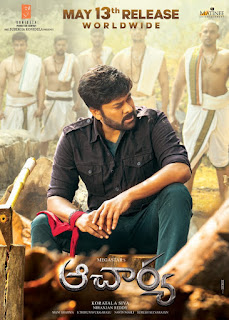 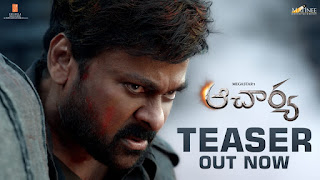 Featuring the Megastar in the titular role, the film is directed by star director Koratala Siva. Presented by Smt. Surekha Konidela, it is produced by Ram Charan and Niranjan Reddy on Konidela Production Company and Matinee Entertainment. Its teaser was released on January 29. With Mega Power Star Ram Charan's voice-over, it is superb. If Chiranjeevi is in the titular role, Mega Power Star Ram Charan will be seen as Siddha, yet another powerful character in the movie. Expectations from 'Acharya' are sky-high because it's coming in the combination of the father-son duo. Mega fans are extremely eager to watch the Chiranjeevi-Charan combination on the silver screen.

The above lines in the action-packed teaser are a highlight. They suggest that Acharya will be doing heroic things for the protection of Dharmasthali. Mani Sharma's background score is a big asset.

'Acharya' is now in the filming phase. A huge set has been erected at Kokapet in Hyderabad. The temple set we see in the teaser was set up here. This is the biggest temple set in India. Tirru is the cinematographer. Kajal Aggarwal is playing a female lead.

The film will release in theatres in a big way on May 13 all over the world.