Section of Washermanpet – Wimco Nagar (9.051km), supported by Japan,
was flagged off today

~ Strengthening Connectivity and Transportation in Chennai ~

The Government of Japan joins in felicitation in welcoming the inauguration of the section of Washermanpet – Wimco Nagar (9.051km) of Chennai Metro Rail Project – Phase 1 Extension. The event was graced with the presence of Shri Narendra Modi, Honourable Prime Minister of India, in presence of Thiru Edappadi K. Palaniswami, Honourable Chief Minister of Tamil Nadu, Thiru Banwarilal Purohit, Honourable Governor of Tamil Nadu, and other dignitaries. Honourable Mr. TAGA Masayuki, Consul General of Japan in Chennai, attended the ceremony together with other dignitaries.

Speaking on this occasion, Mr. SUZUKI Satoshi, Ambassador of Japan to India said, “Chennai Metro Rail Project – Phase 1 Extension is an important urban development project towards sustainable and eco-friendly urban development in Chennai, an India’s largest industrial metropolis, where a number of Japanese companies resides. It caters rapid, seamless and punctual mobility to the people in the northern coastal part of Chennai by directly linking to the city centre and Chennai Airport. I am very proud that Nippon Signal, a highly capable Japanese company specialized in automated fare collection system has been contributing to this important urban development project. We have committed to Chennai Metro Rail Project – Phase 2 too, through providing expertise and fund of “Modified STEP”, a facility specially arranged for India with very concessional conditions. We are looking forward to continuing to work with our Indian friends on Chennai Metro Rail Project.”

Speaking on this occasion, Mr. MATSUMOTO Katsuo, Chief Representative, JICA India said, “In large cities such as Chennai, traffic congestion has become a serious problem as the result of increasing road transportation needs. The newly inaugurated stretch will improve mobility to prominent areas of Chennai, in particular the northern part. This extension line will enable the people in the northern part of the city to travel from Wimco Nagar to Chennai International Airport in south Chennai in just 1 hour. The estimated figure of Greenhouse Gas (GHG) reduction by the Project is 60,000 tCO2/year approximately. Furthermore, with the fully operational Chennai Metro Phase 1, 10.4 million commuters are estimated to gain connectivity. The project also ensures safe travel for passengers including female, aged, and specially abled. The inauguration of this stretch will mark the successful completion of Phase- 1 of the Chennai Metro and will pave way for the ongoing Phase- 2 of the Project financed by JICA. 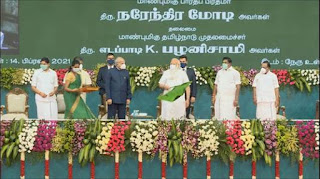 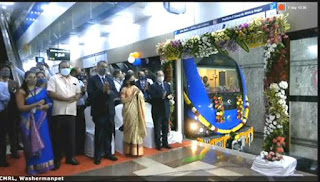 administrative institution under the Government of Japan, the Japan International Cooperation Agency (JICA) aims to contribute to the promotion of international cooperation, as a sole Japanese governmental agency in charge of ODA implementation. JICA is the world's largest bilateral donor agency. JICA works as a bridge between Japan and emerging countries, and provides assistance in forms of loan, grant and technical cooperation so that the emerging countries can strengthen their capabilities.