Following the groovy response of

Following the groovy response of "100", actor Atharvaa Murali and director Sam Anton are collaborating again for a film, produced by Shruti Nallappa of Pramod Films, whose recent release ‘Maara’ was a good success.

The yet-to-be-titled film will be an out and out action-thriller with father-son emotional bonding as the central theme. Apparently, Atharvaa Murali is undergoing special training for the stunts as there are many action sequences in the film. Since BGM will have pivotal importance in the film, the makers have roped in Ghibran to compose music. Krishnan Venkat is handling cinematography for the film. 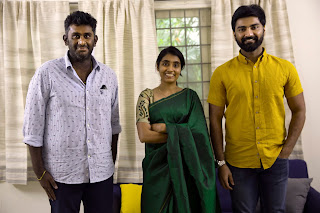 Pramod Films, which has carved a niche of excellence with the production of 40 Bollywood movies, is producing this film on a grand scale. The film will have web-based crime (DARK WEB) as the core backdrop. The film will also have more importance for humour.

Prateek Chakravorty and Shruti Nallappa of Pramod Films are producing this film and the details about others in the cast and crew will be announced soon.