Marathi film ‘Drishtant’ breaks the barrier to become the

• The makers have onboard visually challenged singers, musicians as well as dubbing artists

Marathi films have always known for their many unique features that they offer to the audience and one of them is powerful content. Right from the advent of cinemas, we have seen various experiments happening in the film industry whether, in Bollywood or Regional cinemas, Drishtant is all set to surprise us in a very different way.

‘Drishtant’ which is in the post-production stage stars visually challenged actors for the first time who will play characters with the same disability they have in real life and this is one of India's most proud moment in the history of cinema. Not only actors but the singers, musicians and dubbing artists will be the talent who are facing the same disability. 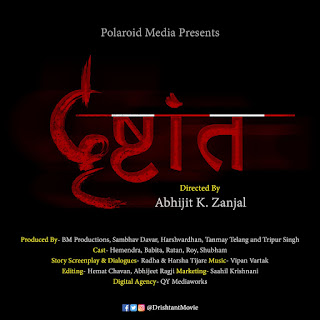 Directed by Abhijit K Zanjal, the film will act as a motivational pad for the aspiring people out there with any kind of disability and so the normal ones can perceive the world in a better way.

Shot in Goa, the film revolves around the lead character Anjinkya essayed by debut actor Hemendra. The film also stars actors such as Babita, Ratan and Yogesh Rao in pivotal roles. The movie touches upon the importance of life and other social messages. Another unique feature of the film is that the makers want to cater to all demographics which includes the deaf and the blind. Hence, the film can be heard by the blind and seen by the deaf apart from the normal viewing for a regular abled audience.

Film's objective is to get people to open their eyes to the world around them and see the beautiful things they have, which brings the subject of organ donation, a noble cause that the film promotes to help the biologically less fortunate.