Apollo Hospitals Chennai successfully completed a Total Femur Replacement on a child from Bangladesh during the pandemic. 11-year-old patient who was bedridden for months with a severely weakening condition has been able to walk for the first time after this complex surgery performed by doctors at Apollo Hospitals Chennai.

The patient, Rajonya Chinmoy Paul a resident of town called Tangai near Dhaka, Bangladesh was not able to walk when he was brought to the Apollo Hospitals Chennai. He was unable to do any of his daily routine without someone’s assistance. Patient was diagnosed with Osteosarcoma of left distal femur (lower part of the thigh bone), a rare type of cancer afflicting the bones. It usually affects the largest bones in the body. Earlier in the year and had undergone chemotherapy in Bangladesh. He visited Apollo hospitals Chennai for further treatment. 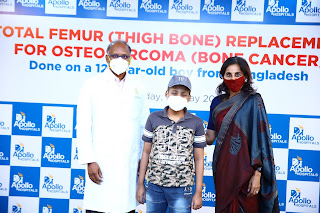 Osteosarcoma is usually found at the end of long bones, often around the knee joint, though occasionally seen manifesting around hip and arms. Osteosarcomas are usually high grade tumors that require an aggressive treatment regimen. It is a life threatening condition, as the tumor can spread rapidly to other organs if not treated in the early stages of disease.

In the past, amputation of the limb for bone tumours were the only option for long term survival of a child. Recent advances in modular prosthesis and surgical technique has allowed to try limb saving strategies, which will lead to the phasing out of amputation. Hence, primary malignant femoral tumours with skip or extensive bone destruction still represent a major challenge for orthopedic surgeons.

Total femur replacement (TFR) is considered an ideal strategy that can restore femoral bone strength and allow patients to resume to normal health.

(Patient Name) underwent a Total Femur Replacement (TFR), a complicated operation that requires a highly trained specialist. In a surgery that lasted --- hours, Dr. R Sankar, Senior consultant Pediatric Orthopedic Spine Surgeon carefully removed the femur from the body and a prosthetic (bone) was replaced. Extra care needed to be taken to save as much of the tissue as possible to support the replaced bone.

Speaking about the procedure, Dr. R Sankar, Senior consultant Pediatric Orthopedic Spine Surgeon said, “In normal circumstances, distal femur (thigh bone) Osteosarcoma is treated with removal of the tumour and replacement of the removed portion with a prosthesis. When we did PET CT scan, we found another tumor focus in the top part of the same bone femoral. There was no other lesion anywhere else in the body. Hence, we decided to go for limb salvage. It was a challenge at this stage to obtain the right prosthesis. As the child is going to grow, we needed to get the right prosthesis which will be lengthened later according to his growth. Also, to make sure once the full femur is replaced, to get good soft tissue reconstruction to prevent the prosthesis dislocating from the hip joint. With adequate precaution, surgery was performed successfully at Apollo Children’s Hospitals.”

Dr. R Sankar also added, “We were able to isolate and preserve nerves and blood vessels supplying the leg. We also constructed a special pouch around hip joint to prevent hip dislocation in future.”

The patient was discharged within a week. The specimen sent for biopsy confirmed that the entire tumour was removed and he showed good response to chemotherapy. Wound has healed well without any issue. As planned, he is getting chemotherapy post surgery. He is gradually regaining his strength in the leg and is presently walking without any support. We expect him to have good quality of life once chemotherapy is completed.

For further media information
Posted by PadmaSabari at 01:58