Sabre Fencer Bhavani Devi, who created history by becoming the first Indian fencer to qualify for the Olympic Games, said she was looking forward to giving off her best performance in Tokyo2020. “It will be the first time when most of our country will watch Fencing and will watch me play, so will give my best performance in front of them,” she said.

By winning a quota through the Adjusted Official Ranking (AOR) method after the Budapest World Cup in March, the 27-year-old from Chennai marked a major milestone in a long journey. She had started her career by training with bamboo sticks. The sense of excitement on becoming the first fencer to represent India at the Olympics isn’t lost on Bhavani.

Given the prevailing Covid-19 situation and with tournaments likely to get cancelled, Bhavani Devi is expecting to continue training in Italy before departing for the Olympic Games from there. Inducted into the Target Olympic Podium Scheme in April, she is now on attending three-week camp in May where she is be training with the Italian National team. 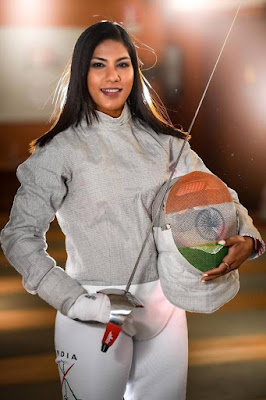 Bhavani Devi, whose late father was a priest and mother is a homemaker, is grateful for the support she has received from her parents at every step. “Only because of my parents, I was able to push myself harder to overcome difficulties,” she said on Wednesday at a media interaction facilitated by the Sports Authority of India.

“My mother always encouraged me. She would tell me ‘If today is not good, tomorrow will be better. If you give 100 percent, you will definitely get the result.’ Even from her hospital bed when she was recovering from Covid-19, she told me focus on my dream and play in the Budapest World Cup rather that return home to be with her,” Bhavani Devi said.

She said voices had dissuaded her from continuing with Fencing when Olympic qualification seemed a distant dream, but her parents encouraged her to carry on, “When my ranking wasn’t close to the qualification, people used to ask why is she investing so much time in sport. She’s a woman, she could get education and think of getting some job. I didn’t get encouragement from outside, my mother and father told me to not worry.”

The Ministry of Youth Affairs and Sports has supported the Fencing Association of India through the Annual Calendar of Training and Competition (ACTC) with a budget of Rs. 16.94 crore in 2019-20. Before she was inducted into TOPS, Bhavani Devi received a special grant of Rs. 20 lakh under the ACTC. Now, for her coaching fee till the Olympics and purchase of specialised equipment, a total of Rs. 19.28 lakh has been sanctioned by the Mission Olympic Cell.