It is the second vernacular dating app launched by Aisle, after Malayalee-focused Arike

High-intent dating app Aisle has announced the launch of its vernacular dating app ‘Anbe’, for the Tamil community both in India and abroad. Anbe, which means ‘dear’ in Tamil, aims to help Tamil-speaking singles from around the world find long-term relationships. Anbe is the second vernacular dating platform developed by Aisle after the Malayalee-focused ‘Arike’, which launched in March of this year. 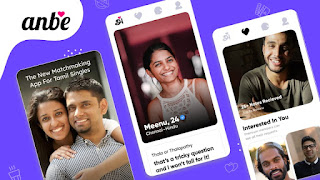 Anbe caters to Tamil singles between the ages of 21 and 40 worldwide, allowing them to interact and form meaningful relationships in a secure, online environment. It also includes several special features designed specifically for the community, such as fun icebreakers that reference Tamil pop culture. Anbe also incorporates an ‘Audio Invites’ feature, in addition to the regular text invites, allowing for personalized invitations to be sent to potential partners.

“The Indian audience has always been interested in high-intent dating. This is especially true the further away you get from urban centres, where English isn’t the predominant language. After the successful launch of Arike, a vernacular platform that caters to Malayalee users, we knew that we were onto something special,” said Able Joseph, Founder and CEO, Aisle. “The rapid growth in the number of Aisle users from Tamil Nadu made it obvious what our next vernacular app should be. With this launch, we will further strengthen Aisle’s reputation as a global leader in high-intent matchmaking.We’ll continue to build on this platform and launch vernacular-focused apps tailored to various states and regions.”

As the first high-intent dating app catering to the Tamil community, Anbe offers an alternative to traditional matrimony websites. Its unique focus creates a memorable experience for young Indians looking for meaningful relationships, and empowers them to make independent decisions about their love lives. Anbe plans to acquire 1 million users in its first year of operations.

Aisle is an app that connects people of Indian-origin from around the world, who are looking for serious relationships. Amongst the top 5 grossing dating apps in India, Aisle is the only brand built by Indians and it competes with billion-dollar companies like Tinder, Bumble etc. Over the last two quarters, Aisle saw more downloads than Bumble and became the second most popular dating app in India. Aisle also recently integrated an interact before matching feature, ‘Rooms’, on its app.

As a leader in the high-intent space, Aisle also recently launched ‘Concierge’, a priority-based matchmaking which allows users to browse through a collection of handpicked profiles on the app.

Based out of Bangalore, Aisle is India’s market leader in high-intent dating apps, built for Indians by Indians. Designed for people of Indian-origin from around the world who are looking for serious relationships, Aisle has staked its claim to the middle ground between traditional matrimonial websites and casual dating apps. Aisle is uniquely customised for Indian sensitivities. Through its proprietary algorithm, Aisle empowers its users to celebrate their diversity by prioritising results based on the things that matter most to them – from mother tongue to hobbies and interests. Today Aisle has acquired over 6 million users, 9 percent of whom are NRIs from across 100 countries. Aisle’s unique approach to romance has made it the fastest growing dating app in India.

Posted by PadmaSabari at 01:48
Email ThisBlogThis!Share to TwitterShare to FacebookShare to Pinterest