The Film Federation Of India meeting was held

The  Film Federation Of India meeting was held in Mumbai

This meeting that was recently held at the The  Club in Andheri, Mumbai, is the first to be held face-to-face after the election of Tamil producer Kalaipuli S Thanu as the President of the Film Federation of India (FFI).

The meeting also discussed the Cinematograph Act amendment announced by the Central Government and many other issues related to the film industry. (Cinematograph act amendment).

It was also mentioned that The FFI Team will meet  the Union Minister of Information and Broadcasting  regarding the same issue. 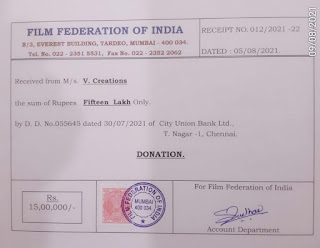 Posted by PadmaSabari at 06:05
Email ThisBlogThis!Share to TwitterShare to FacebookShare to Pinterest