The sports day was dedicated to the Indian contestants of Tokyo Olympic 2020 for their commendable performances. 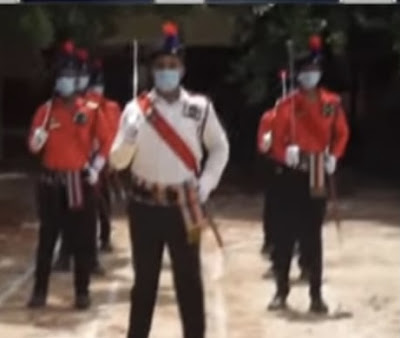 The one hour live streaming started off with a blaze of music and a burst of colours, as the screen was a fun-filled fest of energy and light.
Several thousands of students participated and staged in various activities.

The virtual sports fiesta was declared open and it started off with flag hoisting, parade where students synchronised their feet with the band troop and lighting the Olympic torch of hope.

An oath was administered to the students to participate in sports with a sportsman  spirit. The sports day activities and challenges were designed to abide by the social distancing rules . Students actively participated in an array of challenges including Yoga, Push ups, Burbees, Jumping Jacks and many more.

The school ensured that all the events were completed confined to the Covid prevention norms. All the winners were awarded.

The fiesta continued with colourful culturals, pyramid formations which was eye feasting to the viewers.

A lively day filled with enthusiasm and sportsmanship which attracted thousands of viewers.

The sports day meet ended harmoniously with the National Anthem.