Female lead played by Actress Hansika Motwani & This being her 50th film ‘Maha’ has already gained excellent response for its visual promos, thereby getting the expectations escalated. While the film is all set to have its way into cinema halls soon. 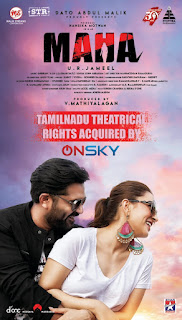 While Hansika Motwani is playing the lead role, Silambarasan TR appears as a pivotal role. Srikanth, Karunakaran, Thambi Ramaiah, Baby Manasvi, and a few more prominent actors are a part of this star cast.

The official announcement on the release will be made soon.