Abhishek Agarwal who scored a blockbuster with The Kashmir Files is coming up with his next, Tiger Nageswara Rao - a Pan India film. The movie starring Mass Maharaja Ravi Teja had its opening ceremony today, on the occasion of Ugadi, which marks the beginning of the auspicious Telugu New year. The ceremony was held at the Novotel (HICC) in Madhapur. The grand gala launch event was organized like never before in the Telugu film industry over many years. Megastar Chiranjeevi, Union Minister Kishan Reddy, The Kashmir Files Director Vivek Agnihotri, Taran Adarsh from National media, and many others attended the event. 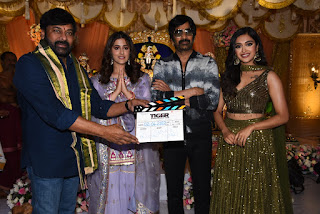 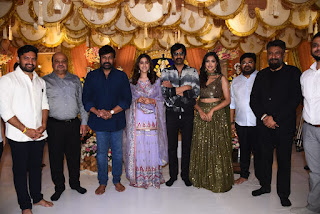 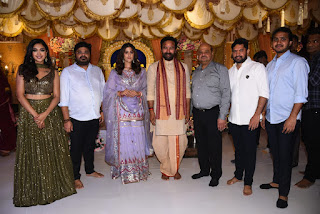 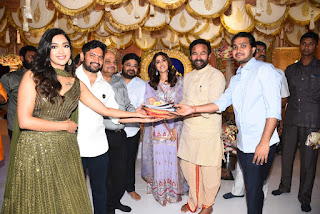 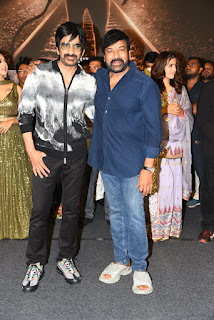 Megastar Chiranjeevi sounded the clapboard for the Muhurath shot, while the film's presenter Tej Narayan Agarwal switched on the camera for the first shot on hero Ravi Teja, heroines Nupur Sanon and Gayatri Bhardwaj. Union Minister Kishan Reddy handed over the script. The Kashmir Files Director Vivek Agnihotri was the Honorary Director for the first shot.

Chiranjeevi unveiled Tiger Nageswara Rao's Pre-Look motion poster. Speaking on the occasion, Chiranjeevi wished good luck to all in the Telugu New Year. "The story of Tiger Nageswara Rao was narrated to me by director Vamsee during the pandemic. I could not do the film due to some reasons. Now my younger brother Ravi Teja is doing it. I heard about Stuartpuram Nageswara Rao when I was very young. My father used to work in Chirala Perala. Stuartpuram was next to that. All the people there used to praise Nageswara as a hero. I learned a lot of things about him from my father. Years later, Vamsi came up with a commercial story about him. It is good that Ravi Teja is doing this movie. I am happy that Abhishek Agarwal is making it. I wish Ravi Teja, Abhishek, and Vamsi a bigger hit than The Kashmir files," he said.

Hero Ravi Teja wished everyone on the occasion of Ugadi.

Union Minister Kishan Reddy is the special guest at the launch event. "We are happy to attend the launch of Tiger Nageswara Rao's film on Ugadi, which brings evryone sweet, sour, and bitter experiences in life. Abhishek Agarwal and his father have been family friends for many years. They recently made a film called The Kashmir Files and made the agony of Kashmiri Pandits known to all Indians. Director Vivek was able to show the story to the best of his ability. There is still much to be discussed about the Pandits. Most people make movies. There are films that are useful for the country. I appreciate Abhishek for making such a useful movie. Even now, they have picked the story of Tiger Nageswara Rao. I pray to God for this film to become success too," the minister said.

Director Vamsi thanked Megastar Chiranjeevi for attending the launch. "I travelled with Ravi Teja for four years. It gave us a lot of energy to think that he liked the story and agreed to do it. Not only Ravi Teja fans but also the fans of all Telugu heroes will appreciate the film," the director confidently said.

Producer Abhishek Agarwal said, “Ugadi wishes to everyone. I want to thank Chiranjeevi garu for coming and blessing us. Thanks to Kishan Reddy. I am expressing my gratitude once again to the audience who made The Kashmir files a big hit. I hope that they will bless Tiger Nageswara Rao as well".

The Kashmir Files director Vivek Agnihotri also wished all the best to the team. "Great films come with a commitment. I would like to thank Abhishek and his father for helping me make The Kashmir Files a success. I know Vamsee since last year. He has complete confidence in my film. I am even more confident about this film he is making with Ravi Teja now. The Kashmir files crossed 300 crores in Indian history. I appreciate Tiger Abhishek on this occasion," the talented filmmaker said.

Heroines of the film - Nupur Sanon, Gayatri Bhardwaj, and Renu Desai who will be seen in a crucial role in the film also wished Happy Ugadi to the audience and thanked the guests for coming to the event.

The event was also attended by directors Sarath Mandava, Trinadha Rao Nakkina, Sudheer Varma, Teja and many others.