This is a Film festival held exclusively for films featuring Pet animals. The music is composed by Veena Maestro Rajesh Vaidya, Cinematography by Sudarshan Srinivasan, Art Direction by K. Arusamy and Editing by Barath Vikraman. The screen play is by Anand Raghav and Arunachalam Vaidyanathan.

Arunachalam Vaidyanathan, the Director and Producer of the film, accepted the Certificate and the Cash prize.  Dr. Bhaskaran, Secretary of the Korean Tamil Sangam participated in the event and wished the Director and provided all the help. 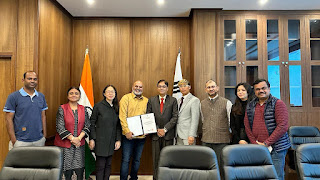 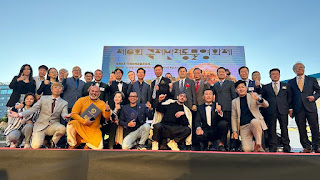 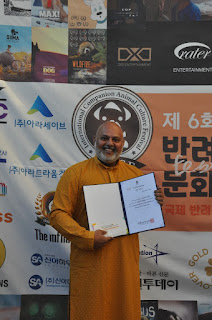 After the award ceremony, the Film was screened for the audience.  The people who watched the film appreciated the movie and expressed that the film portraying the bondage between the Children and the dog was heart warming.  The festival has been ongoing since 2016, and this is the first Indian film to win the top prize in this festival since its inception.

Arunachalam Vaidyanathan said that he is immensely satisfied that his film has appealed to the Korean people transcending the divisions of Country and language. He expressed that the warm reception that he and his film received from Korean audience reflected the theme of the movie that talks about ‘Universal Love’

The applications for the entries from Film makers around the world were invited in July 2022 and the committee announced the results in September 2022.  A jury comprising eminent Korean directors like Koo Sang Beom, Lim Chang Jae, Lee Kwi Deok selected this movie from among the many films that were screen at the festival.

In the meeting they discussed about the encouraging scenario of a mutual liking for the Tamil and the Korean films among the audience of both the countries and discussed the possibility of promoting Tamil and other Indian films as commercial ventures among the Korean audience.

Dr. Sonu Trivedi, expressed his willingness to do all that is possible to help reach good films like Shot Boot 3 to the Korean public.  Director Arunachalam Vaidyanathan would be the first Indian Director to visit the Indian Embassy in Seoul and participate in such discussions with the Indian Ambassador and other officials at the Embassy.

Dr. S. Rama Sundaram the Head of the Korean Tamil sangam along with PRO Ms. Shanthi Prince, Mr. Prabhakaran, Secretary Mr. Padmanabhan, and senior members Mr. Saravanan, Ms. Shobha, Mr. Gopi and Ms. Divya has arranged for this meeting between the Director and the Embassy officials.

The Film Director also thanked the President of Tokyo Tamil Sangam. Mr. Hari, Director Seenu Ramaswamy. M.S. Raju and Mr. Balu back in Tamil Nadu for nurturing and expanding the relationship between the Tamil Film Industry and the Korea Tamil Sangam.

Posted by PadmaSabari at 23:01
Email ThisBlogThis!Share to TwitterShare to FacebookShare to Pinterest