I am the most junior in Varisu family” – Actor Shaam

*“I am the most junior in Varisu family” – Actor Shaam* 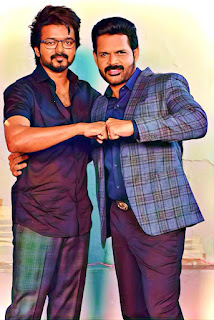 The latest Pongal release ‘Varisu’ marks the first-ever movie of Thalapathy Vijay to be made simultaneously in Tamil and Telugu. The film has witnessed phenomenal reception among the fans and family audiences to a greater extent. The film is directed by Vamshi Paidipally, who earlier made a feel-good entertaining movie titled ‘Thozha’. He has now crafted a beautiful family entertainer for actor Vijay, which is produced by the Telugu Film industry’s leading producer Dil Raju.

When it comes to Vijay’s movies, each and every actor gets recognized for their screen presence, and gain a good response from the audiences and fans. Significantly, Varisu features a huge star cast comprising Sarathkumar, Prabhu, Shaam, Prakash Raj, Telugu actor Srikanth, Yogi Babu, and many more prominent actors.

In particular, actor Shaam, who plays Vijay’s elder brother appears throughout the film alongside Vijay. He is now appreciated for his commendable performance.

Overwhelmed by the heart-warming response to his performance and the grand success of this movie, actor Shaam shares his memorable moments working with actor Vijay in ‘Varisu’.

He says, “20 years ago, I had shared the screen with Vijay sir for a single scene in Kushi, and now, I am really glad to be acting with him in the movie ‘Varisu’ as his brother. Since, the film has senior actors like Prakash Raj sir, Prabhu sir, Sarathkumar sir, and Srikanth sir, I feel I am the most junior in the Varisu family.

I learned a lot from Vijay sir during the shooting of this film. He takes care of every single co-star on the sets without any ego. His respect for everyone is so unconditional. I have never seen him speaking badly about any actor on the sets. What was so surprising is the fact that I never saw him using a mobile phone during the shoot. Even if there was a situation to call someone on phone, he would do it only during the lunch break. I was strongly influenced by this nature and even started avoiding my phone during the shoot.

He would jovially interact with everyone on the sets, and at other times, would be preparing silently for the forthcoming scene shoots. He wouldn’t go for any rehearsals. He would interact a bit and discuss about our combination scenes, and sets out for the take immediately. That’s when, all of us on the sets would get awe-stricken by his magic before the camera.

Actress Rashmika Mandanna is a national sensation and she would be seen energetic all the time on the sets. Since she has a great liking for Vijay sir, she would keep admiring him all the time. She used to feel all those moments were totally unbelievable for her as she never thought she would get an opportunity to work with Vijay sir.

Prakash Raj sir would make sure that the lunch is prepared from his house for all his co-stars when he is shooting for the film. He is a powerful artiste, who can emote through his expressive eyes. On the other hand, myself and Sarath Kumar sir are regular to gym. So when we had our shooting schedules together, both of us would wake up early morning by 4.30 AM and hit the gym. Although I had very few scenes with Prabhu, it was a unique experience working with him.

I would often get curious and ask Vijay sir about his secret of youthfulness, about his workout and diet plans. He surprised me saying that he has no diet plan and would regularly eat Poori, Pongal and other foods without any restrictions, and exercise once in a while.

After the film’s shooting was wrapped up, he invited all of us to his house and served a delicious feast. He made sure of adding everyone’s personal favourite dish as a part of the menu and surprised us. He asked his helpers at home to take rest for the day, and he served the food for us by himself.

I had acted only in a small scene with Vijay sir in Kushi. Few years later, when my debut in lead role ’12B’ got released, he watched the film and conveyed his wishes for my success. He also watched my performance in Telugu movie ‘Kick’ and personally spoke on phone appreciating me.

Producer Dil Raj had invited many leading Telugu producers and distributors for the audio launch of Varisu, who were spellbound over the magnificent crowd and celebration. Many were awe-stricken that they weren’t able to judge whether it’s an audio launch or awards ceremony.

Although I had no opportunity to work with Ajith sir in any movie, both of us have met several times. Both our daughters are schooling together, and we would meet each other during the school events. Ajith sir is someone, who regularly takes part in all his children’s school and educational programs. He is a great example and inspiration on how a parent should be concerned about their children’s education. I would sometimes attend and miss the school related events, and my wife would go for it. She would come back and tell me that when a person like Ajith sir is able to keep aside his busy schedule and take part in such occasions, why am I unable to do it. I have got scolding from my wife several times because of Ajith sir.

When I told Vijay sir that Ajith sir’s Thunivu is getting released along with Varisu for Pongal, he was so happy to watch both movies. His positive approach was so amazing. You all would get surprised by a fact. I was initially approached to play the villain role in Ajith sir’s Thunivu movie, but I couldn’t take it up as the shooting dates of both the movies clashed, and couldn’t be adjusted. I thank director Vinoth for considering me to play the particular role in this movie.

Since Vamshi sir hails from Telugu film industry, there were many assumptions that Varisu would be a movie with Telugu flavour. However, now they have changed their perception towards the film, after watching it. Vamshi is someone, who loves Tamil so much. He would interact with everyone on the sets in Tamil alone. He created every single scene keeping Vijay fans in mind. He has done a great job in favour of Vijay fans than the directors of Vijay sir’s previous movies. It’s great to see that the fans are celebrating his efforts now.

I am now acting in a movie directed by Vijay Milton, and another movie as the solo lead character. The announcements will be soon made by the respective production houses.”

Posted by PadmaSabari at 01:45
Email ThisBlogThis!Share to TwitterShare to FacebookShare to Pinterest