Apollo Hospitals Gives a New Lease of Life to a

Apollo Speciality Hospitals, OMR a part of the Apollo Hospitals Group, Asia's largest and most trusted multi-specialty hospital chain, has brought back the life of a 20-year-old man who accidentally fell from the 17th floor of a construction site. A panel of doctors headed by Dr. Roopesh Kumar Senior Consultant, Neurosurgeon, Dr Pratheema Ramachandran and Dr. Devachandran Jayakumar, Critical care Consultants, Apollo Speciality Hospitals OMR strategized multiple trauma treatments according to his injuries bringing him back to life. 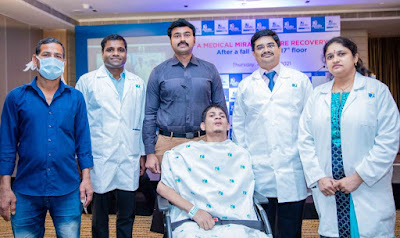 Mr. M.D Firoj Alam, a 20-year-old, air conditioning mechanic, was working at a major construction site in Perungudi. On the 9th of December 2020, Mr. Firoj accidentally fell from the 17th floor landing on to the fifth floor of the building, he had sustained multiple injuries in his body. He was immediately rushed to Apollo Specialty Hospitals, OMR for emergency treatment.

The patient was brought in an unresponsive state, with breathing problems, extreme hypotension, and bleeding from the head, mouth, ears, and nose and both the his legs had exposed bones. Specialists at the Emergency Department immediately secured his airway and started artificial respiration; treating his hypotension with blood transfusion and IV fluids.

Once he was relatively stable, a whole-body trauma series CT scan was done which revealed Severe traumatic brain injury with blood clots in his occipital lobes, multiple facial fractures, Cervical spine fracture, liver and right kidney injuries with hemoperitoneum and both lower limb bone fractures (compound).  He was shifted to ICU for further management.

Explaining this further during the press meet, Dr. Roopesh Kumar Senior Consultant, Neurosurgeon, Apollo Specialty Hospitals OMR, said “We immediately sedated him and paralysed him to make his condition more stable.  We performed tracheostomy to facilitate ventilation and administered medications to reduce the brain swelling. Once his blood pressure got stabilised, his leg fractures were fixed through surgeries by our Orthopaedic surgeons and plastic surgeons. A team of Urologists and Gastroenterologists managed his liver and kidney injuries through non-operative procedures”.

Adding to this, Dr. Pratheema Ramachandran and Dr. Devachandran Jayakumar, Critical care Consultants, Apollo Specialty Hospitals OMR said, “Subsequently, his damaged facial bones were surgically corrected by the Faciomaxillary surgeon.  His intermittent fever spikes and was managed with antibiotics as per the guidance of infectious disease consultant. He was shifted to rehabilitation unit and we continued with physiotherapy, speech and swallowing therapy. As his conscious level regained, he was behaving very aggressively with severe mood swings. This was managed by Psychiatrist and Neuropsychologist and he got normalized gradually.”

Post all the procedures the patient had significant stiffness of all four limbs which was becoming an obstacle to his rehabilitation. He was administered multiple spinal intrathecal injections of centrally acting muscle relaxants along with oral medications which aided in reducing the stiffness making it pliable for walking.

Nearly two months of intensive care management, multiple surgical procedures, various medications, physiotherapy, speech therapy, cognitive therapy, rehabilitation and excellent nursing care at Apollo Speciality Hospitals OMR, Mr.Firoz is all set to get back to his native town along with his father who was a support to him throughout this period