~ Composed by the fantastic singer of some of the biggest movies, Kaala Bhairava, the title track has been written by Manoj Muntashir Shukla and performed by Kaala Bhairava and Divya Kumar ~

~ The 13-episode animated series The legend of Hanuman will be available in 7 languages; and will release exclusively on 29th January 2021 on Disney+ Hotstar VIP ~

After an impactful trailer, Hotstar Specials released an electrifying title track for its all new mythological animated series The legend of Hanuman – a visually mesmerizing portrayal of the unseen tale of Mahabali Hanuman. The title track is composed by Kaala Bhairava who rose to fame with Bahubali and Manoj Muntashir Shukla has penned the magnificent lyrics, performed by Kaala Bhairava and Divya Kumar. 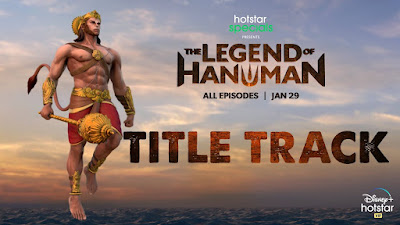 The title track is the perfect summation of the extraordinary life of Lord Hanuman whose lesser-known journey of self discovery will come alive through superior quality visuals mounted on a global scale, previously never seen before in India. Produced by Graphic India and created by Sharad Devarajan, Jeevan J. Kang and Charuvi P. Singhal, The legend of Hanuman brings forth the power of great storytelling combining mythology with using easy-to-understand words and phrases, that make it an ideal watch for adults, children and families across the country. The series has been directed by Jeevan J Kang and Navin John, with lead writers Sharad Devarajan, Sarwat Chaddha, Ashwin Pande and Arshad Syed and chronicles the perpetual war between the forces of good and evil; and how the immortal Hanuman became the ever-burning beacon of hope amidst the harrowing darkness.

Composer and singer Kaala Bhairava said, “I have created music compositions for movies of different genres in the past, but I have to say that the title track for the series The legend of Hanuman tops the list for me. It’s a fine blend of mythological narration and a contemporary tune that will hopefully excite everyone just like it did for me. The lyrics of the song matches the visual action in the series and brings out the strong emotions associated with Lord Hanuman. I am delighted to be a part of this new-age mythological series which will make Lord Hanuman relatable to all its audiences.”

So, sing along Jai Hanuman with this all new track as all 13 episodes of the show release in 7 languages - Hindi, Tamil, Telugu, Marathi, Bengali, Malayalam and Kannada; exclusively on 29th January 2021 on Disney+ Hotstar VIP.