STR-Gautham Karthik starrer “Pathu Thala” has raised the bars of expectations with the phenomenal response over its title announcement. With the shoot all set to go on floors by this summer, the inclusions to star-cast continue to create more sensation. Following Priya Bhavani Shankar, who is playing the female lead role, a couple of prominent artistes – Poet-Orator Manushyaputhiran and actor Teejay (Asuran fame) are signed to play important characters. 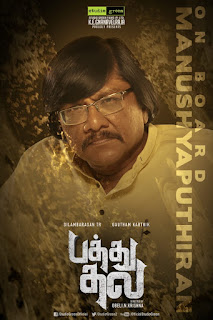 Director Obeli N Krishna says, “We are happy to welcome the iconic Manushyaputhiran and Teejay onboard to play important roles. We know Manushyaputhiran for his proficiency as a poet, and orator. He will be playing the role of a social worker named Udhayamoorthy. His character has lots of positivity and adds more intensity to the whole script  Everyone is aware of the fabulous screen presence and performance of Teejay in ‘Asuran’. When we approached him for this role, he was in London and our whole discussions and conversations happened through Zoom calls. He was so impressed with the plot and his character that he became enthusiastic. His dedication became so much voracious indeed. Although we thought that doing a  Look Test for his character would be impossible due to his absence here, he surprised us by taking the inputs and getting it done from London itself. The images were befittingly perfect as I envisaged, and we are using them for the promotional posters. I am looking forward to a great positive experience working with these talented personalities.”