UNDEKHI – can you unsee

UNDEKHI – can you unsee what you witness?

In India, wedding celebrations have been reduced to a show of wealth & power and can sometimes take an ugly turn. The power of money has become far more superior than an individual’s life. Incidents have been reported on the murderous shenanigans that happen at weddings, many of which go unseen or unheard. Why? Does the truth not matter, and can the influential get away with anything? Does a human life hold no value or respect irrespective of their status in the society? Based on true incidents, with the backdrop of a wedding, SonyLIV’s next original, Undekhi, unveils a nerve-wracking chase replete with inter-family politics, display of power, skewed morals and oscillating equations that will compel you to take a stand! Produced for Applause Entertainment by Siddharth Sengupta's Edge storm Productions and directed by Ashish R. Shukla, Undekhi will stream on SonyLIV starting 10th July.

On account of a murder in the Sundarbans, two tribal girls are on the run, with DSP Barun Ghosh on their trail. The Atwals, an influential family from North India, are hosting the wedding of their scion in Manali. Power defines the world of Atwals and fear is the only means to sustain it. There is a cold-blooded murder at this wedding and the only one who has the proof of this horrible crime is the wedding videographer Rishi, an amateur filmmaker from Delhi. Will this proof go unseen or will the influence of the Atwals take precedence in this matter? What follows next is a fast-paced, gripping narrative that will unearth more than what meets the eye. 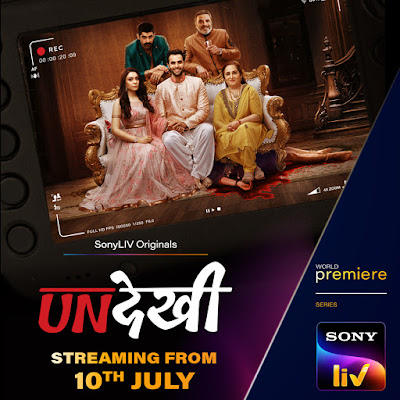 Undekhi will see an ensemble cast of supremely talented actors like Harsh Chhaya, Dibyendu Bhattacharya, Ankur Rathee, Surya Sharma, Anchal Singh, Abhishek Chauhan, Ayn Zoya, Apeksha Porwal and Sayandeep Sen. The dialogues of this crime thriller have been penned by the versatile actor Varun Badola who garnered a lot of appreciation for his stellar performance in the recently released Your Honor.

Comments:
Ashish Golwalkar - Head-Content SET, Digital Business, Sony Pictures Networks India
Through our originals, we want to bring forth an array of engaging narratives that are distinctly Indian in their story telling. Undekhi is one such story that needed to be told. It gives an insight into a certain section of the society and delves into the characteristics of their world. We are delighted to partner with Applause Entertainment yet again and offer compelling content to our subscribers.

Deepak Segal, Content Head, Applause Entertainment
With Undekhi, we have made a heartland crime-drama, which is highly engrossing and captivating. The premise of the show is uniquely designed in a way that each episode, with its unpredictable plot, textured characters, will surely keep the audiences on the hook. We are very excited to be presenting our second offering with Sony Liv.

Sidharth Sengupta, Creator, Screenplay and Producer, Undekhi
I am extremely elated and excited for the launch of Undekhi on SonyLIV. The show is inspired from a true event and sheds light on the dark realities of human nature, a story one needs to see, believe and act accordingly. Undekhi also lays out an impactful statement on the dynamics of power in our society and our helplessness and submission to it. It is sure to leave the audience surprised. This is our first association with Applause Entertainment, and I am looking forward to the show’s release.

Ashish R Shukla, Director, Undekhi
What drew me to Undekhi is the unabashed writing and ability to tell a story of amorality so well. Unlike any conventional thriller it's more of a human story where every character is on the edge and on the brink of breaking their world apart. The series benefits from some stupendous performances and locales of Himachal add a distinct flavour to the show. Every character has been well etched out and contributes to the potential of the story. I am really excited for the audience to experience this show.
Posted by PadmaSabari at 04:52