A Twitter user who goes by the handle @VikieLeaks today confirmed that Vikas Gupta from the Bigg Boss season 11 will enter the Bigg Boss house. 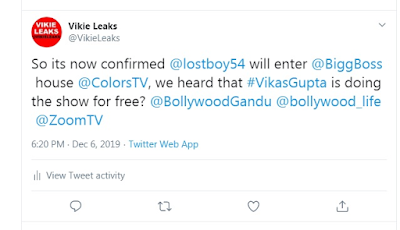 Vikie Leaks also confirmed that Vikas Gupta is not being paid for his entry in the show and is doing it free. It seems Colors wants to bring in some of the top entertainers of the previous seasons, but is not ready to pay them exorbitant amounts @VikieLeaks suggested. Sources say Vikie Leaks is from the production team at Endemol and knows a lot about the insides of the show.

Meanwhile, Vikas Gupta also confirmed his entry inside the Bigg Boss 13 house, with an Instagram post. The post comes after days of speculations whether he will join the show anytime soon.


Sharing a picture of himself standing in front of Lord Ganesha - who is worshiped before starting new projects, Vikas wrote, “Om Gan Ganpatay Namah !!! This is going to be another journey let’s learn , let’s evolve . Let’s do good . #vikasinBB13 #lostsouls #raginimmsreturns2 #vgang #mastermindisback #keepsupporting #keepitsimple.”

We heard that Arshi Khan also from Bigg Boss 11 is also keen to join the show, but is asking for too much and the makers are not ready to pay her much.
Posted by PadmaSabari at 07:22