Subscribers of ZEE5 Club will be able to view premiere episodes of their favourite ZEE Tamil shows, before TV! 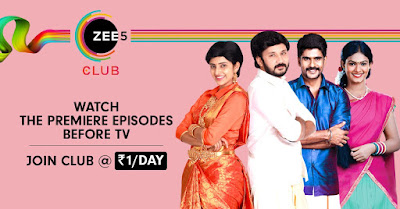 ZEE5, India’s largest video streaming platform that has consistently been growing in strength and stature, thanks to its quality content. ZEE5 Club is the most recent addition that the platform has announced that is bound to delight its subscribers.

The OTT player is looking to further consolidate its strength in the Tamil market by capitalizing on the popularity of the Tamil shows on ZEE Tamil. With ZEE5 Club, a cost-effective and wonderful option, subscribers can access premiere episodes of all their favourite Tamil shows, before TV.

There are many factors that make this offer irresistible and unique!

The announcement, which is sure to delight fans, has already got several television stars excited and talking about it.

Television actors Vishnu Vijay, Aayesha, Sreekumar and Nakshathra, who recently went live for an interaction with fans on Zoom, were all praise for the move by ZEE5.

Vishnu Vijay, who plays the lead along with Aayesha in the immensely popular serial Sathya that airs on ZEE Tamil said, “This is a wonderful move that has got me super excited. There are many fans who are curious to know about the developments in the plot of the show. ZEE5 Club will give them all an opportunity to know what’s going to happen next, a day in advance. I am sure that there will be many takers for ZEE5 Club.”

His co-star in Sathya, Aayesha, concurred. “This move by ZEE5 will result in a win-win situation for everybody involved. It is bound to benefit subscribers who can now know developments in their favourite serials one day before it appears on TV. This in turn will increase the popularity of the serial and thereby, of the channel as well,” she said.

Actors Sreekumar and Nakshathra, who plays the lead in another immensely popular serial Yaaradi Nee Mohini too were equally thrilled by the announcement.

Says Sreekumar, “This is a brilliant move by ZEE5. The pricing of the subscription is what comes across as a deal clincher for me. A one-year subscription costs just Rs 365. That works out to just a Rupee a day and for this, one can have access to all the serials and shows, a day in advance.”

Nakshathra too gave a big thumbs up to the move. “This move to introduce ZEE5 Club, which provides access to Zee Tamil’s shows a day in advance, is a very innovative move that is sure to have many takers,” she remarked.

Join ZEE5 Club at just Rs. 365/- and watch premiere episodes of your favourite ZEE Tamil shows before TV.
Posted by PadmaSabari at 21:21