G Dhananjayan’s Creative Entertainers and Distributors had acquired the rights of 'Kavalthurai Ungal Nanban', which added more Midas-touch to the film. Now, the film gets an additional bonanza as National award-winning filmmaker-producer Vetri Maaran will be presenting the film through his Grass Root Film Company. 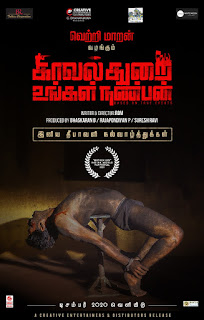 G Dhananjayan, Creative Entertainers and Distributors says, “It’s bliss to have such an amazing person like Vetri Maaran sir showing interest in this film. He has been very much passionate about content-driven films and would impart the best of his abilities to be a part of such works. He was very happy about the way ‘Kavalthurai Ungal Nanban’ has come out and enthusiastically affirmed about presenting this film through his banner of Grass Root Film Company after watching the film & getting impressed with it. This is going to elevate the film’s stature towards finding the best release.”

The film is directed by RDM and is produced by Bhaskaran, Rajapondiyan & Suresh Ravi for BR Talkies Corporation and White Moon Talkies. Director-Producer Vetri Maaran’s Grass Root Film Company along with G Dhananjayan’s Creative Entertainers and Distributors will be releasing the film all over Tamil Nadu in December 2020.