Rindhya's stellar performance in the Nationals with a score 8.5 points out of 11 enrouted her to win the title thus qualifying  her to represent India in the upcoming prestigious World Youth Chess Championships, 2021 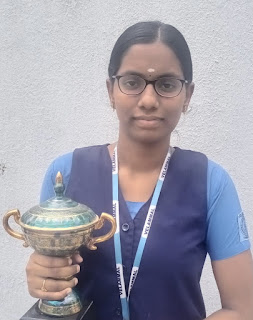 Rindhiya has always been under the shadow of her elder sister Woman Grandmaster V Varshini, who has won several laurels at  the National level and thrice at the Commonwealth.

The guidance of Shri Thiyagarajan, her first Coach and the reputed FIDE Trainer, K Gopalakrishnan has led her to reach this feat.

The Champion and her father, Shri Velavan are  extremely grateful to the management of Velammal Matriculation Higher Secondary School for all the support they have provided them all these years.
"All these would not have been possible without Velammal", were the words of the Champion.

The School Management congratulates her on her magnanimous victory and wishes her success in her future endeavours.