The inauguration of the event – the 34th National Convention 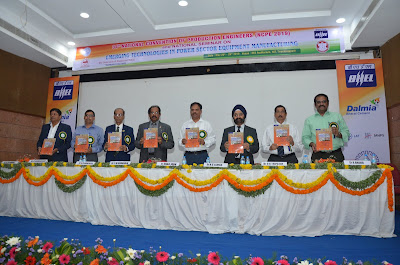 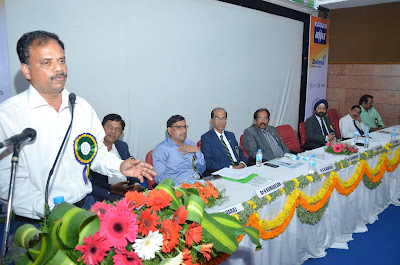 The inauguration of the event – the 34th National Convention of  Production Engineers 2019 organized by the Tiruchirappalli Local  Centre of The Institution of Engineers (India) was held on 25th May  2019, Saturday at EEE auditorium, NIT, Tiruchirappalli.  As a part of  this National Convention, a national conference on “Emerging
Technologies in Power Sector Equipment Manufacturing” is also being  held. This National Convention, sponsored by Production Engineering  Division of IEI is the apex activity held once a year aiming at the
achievement of technical and professional growth through intensive  technical content and mutual interaction.
In the inaugural address, Er. Shaji John, Director (Power), NLC India  Ltd complemented Tiruchirappalli local centre, IEI for selecting a  very relevant topic for the conference. Also, he highlighted the  following aspects:
1.      A nation's prosperity is judged by the per capita consumption of  electricity. India's per capita consumption of electricity which  stands at 1200 kWhr is well below the world average of 3200 kWhr and  per capita consumption of the developed nations like USA, Europe,  Japan is far ahead and in the range of 10000 to 18000 kWhr. The  installed capacity of India which stands at 356 GW as on 30.04.2019  with contribution from Thermal at 63.5%, renewables at 22 % and the  rest from Hydro, Nuclear etc.2.      Indian economy is the World's sixth largest and is poised to  overtake that of Japan, Germany, UK and finally China and USA and  become the largest economy by the year 2050 with 7 to 8 % growth  during the next three decades. If India's GDP has to grow at 7 to 8 %,  necessarily the infra structure and in turn power sector has to grow  at a compounded rate of 12%.3.      In the energy mix, the share of fossil fuel based power generation  today is at around 63 % and the rest comprising of renewables, hydro,  nuclear at 37 %. The gap between fossil fuel power generation and the  rest will narrow down with more and more focus on renewables. In order  to have a sustained and reliable growth there has to be a proper  energy mix. Hence, coal/lignite based energy and renewable energy has  to grow in tandem in our country.4.      Many power utilities have already started implementing the advanced  ultra-super critical technology which translates into higher boiler  efficiency, lesser turbine heat rate and consequentially lesser fuel  and lesser emissions. Under this scenario, the national seminar on  "Emerging Technologies in Power Sector Equipment Manufacturing"  assumes significance.5.      Regarding NLC India Limited, he indicated that the company is  having impressive track record with the establishment of first lignite  mines in India and further, a 600 MW capacity TPS  linked pit head  power station in collaboration with USSR in the year 1956. Today,  apart from Thermal Sector & Lignite Mining, NLCIL is spreading its  wing - expanding intensely, making pan India presence, venturing into  various new horizons in Energy domain like coal mining, coal based  Power Plants and Renewable Energy and also ventured into Power Trading.Dr. T.M.Gunaraja , President, The Institution of Engineers (India) and  Immediate Past President Er. S.K. Banerjee were also present in the  inaugural function. Dr. GUNARAJA indicated that many major technical  events are planned during the centenary year of the Institution of  Engineers (India), which is starting from September 2019. He said that  IEI has tied up with leading institutes towards enhanced learning  platforms.The function was presided over by Dr. Dev Kumar Tripathy,    Chairman,  Production  Engineering Division Board, IEI. In his presidential  address he complimented the Tiruchirappalli Local Centre on organising  the program in a professional manner. The briefing on the theme for  the National Convention was given  by Er. R. Selvaraj,  Convenor and  Dr. N. Kumaresan, Chairman, Tiruchirappalli Local Centre, The  Institution of Engineers (India) welcomed the gathering.As part of the National Convention, Production Engineering Division  Board of IEI confers Eminent Engineer Awards to leading engineers  involved in manufacturing / production. For the year 2019, the  recipients of the award are - Er. A.S. Lamba, Whole Time Director and  Group Chief Executive, L&T-MHPS Boilers Private Limited, Faridabad and  Dr. A. Noorul Haq, Visiting Professor, Dept. of Production  Engineering, National Institute of Technology, Tiruchirappalli. The  awards were presented to the recipients by Dr. T. M. Gunaraja,  President, IEI.Additionally, Production  Engineering Division Board, IEI selects two   Young Engineers, below 35  years of age to encourage the upcoming  talents,  on pan India basis and confers Young Engineers award. For  the year 2019, the recipients of the award are: 1) Dr K Jayakrishna,  Associate Professor, Mechanical Engineering Department, Vellore  Institute of Technology (VIT) University, Vellore and 2) Dr Ankur  Gupta, Faculty, School of Mechanical Sciences, Indian Institute of  Technology Bhubaneswar. The awards were presented to the recipients by Er. S.K. Banerjee,  Immediate Past President, IEI. Er A. Anand, Hon.  Secretary, Tiruchirappalli Local Centre, proposed the vote of thanks.BHEL, Tiruchirappalli, National Institute of Technology  Tiruchirappalli and Anna University BIT campus are closely associated  with this event. Also, this event is sponsored by leading organizations TNPL and L&T-MHPS Boilers Private Limited.  More than  100 delegates, from all over India representing various industries and  educational institutions are participating in this event. As part of  this event, 1.  F W Taylor Memorial Lecture and 2.  G C Sen Memorial  Lectures will be delivered by Mr. A. Pari, Director, CRP (India) Private Limited, Chennai and Dr. L. Karunamoorthy, Chairman of Faculty  of Mechanical Engineering,  Anna University, Chennai, India.  More  than 30 papers will be presented in this two days conference.
Posted by PadmaSabari at 03:03