Wardwizard on the mission to

Wardwizard on the mission to spread cheeriness;

WardWizard Innovations and Mobility Ltd, manufacturers of the one of the country’s leading electric two-wheeler brand, ‘Joy e-bike', today unveiled its new brand campaign #BharatkaJoy with the anthem ‘Saath Chalein’

Capturing the emotions of millions of Indians across different landscapes, the campaign is divided into multiple phases focussing on different layers of humanitarian connections like ‘Joy of giving’, ‘Joy of caring’, ‘Joy of Celebrations ‘, etc. Which will continue throughout the year.

The first phase of the campaign showcases the diverse culture of India united under the emotion of Joy along with the technological phrase ‘Desh le raha he Electric Angdai’. It further exhibits the happiness of every Individual which they garner by doing something for their country. 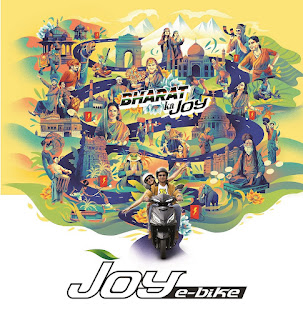 Speaking on the new campaign Mr Yatin Gupte, Chairman & Managing Director, Wardwizard Innovations & Mobility Ltd., said, “Our new brand campaign is dedicated to bringing a sense of joy and happiness. The film captures diverse cultures along with the moral values that depict the story of each region and its traditions. This campaign further highlights the electrifying evolution that the country is going through for a healthier environment as well as our intent toward sustainable today and tomorrow. Ushering the positivity and power, our new anthem ‘Saath Chalein’ will resonate with the aspirations of all Indians.”

Showcasing the great unity of East, West, South, and North India, the anthem ‘Saath Chalein’ was beautifully directed by Vashishth Mahendra Upadhyay, music by renowned composer/singer  Siddharth Amit Bhavsar and a Hindi version sung by Raghav Kaushik. In addition to this, the anthem will be released in 4 other languages including Hindi, Bengali, Telegu, Kannada, and Malayalam. The campaign will be having a 360° platform media approach, comprising Digital, Television, Social Media, Print, and Outdoor to reach the maximum possible number of TG of JOY E-BIKE.

The campaign is conceptualized and shot in various locations across India. Starting from Kashmir, the film showcases the culture and emotions of the Indian crown with Wolf+,  Nanu+, And Beast, rushing on icy terrains in Zojila pass (the world’s second dangerous road) at -7° Celsius with the anthem ‘Saath Chalein’ in background.

The landscape shifts to Jaipur, Rajasthan, showcasing the Royal culture and traditions of Rajasthani people with a Wolf+ in the middle under the majestic backdrop of Amer Fort. The journey continues, driving the Wolf+ along the Ghats of Varanasi showcasing the Joy of spirituality and narrow lane foodie culture of India.

Switching the panorama the Nanu+ rushes along the backwaters of Alleppey, Kerala. Demonstrating the rich heritage of Kerala with an anthem in the background. The film ends with a message of unity “Saath Chalein Hum Tum”

Lyrics of the Anthem are: