Arun Vijay is really elated in having completed his one of the dream projects with director Arivazhagan tentatively titled as #AV31.

Tamil Cinema is rapidly coping up with the new normal procedural life post covid. Shootings are being conducted with all good practices as prescribed by the government.

Arun Vijay is really elated in having completed his one of the dream projects with director Arivazhagan tentatively titled as #AV31.The 'Kuttram 23' Duo were roped in by All in Pictures's Vijay Raghavendra for an high budgeted action thriller. this film 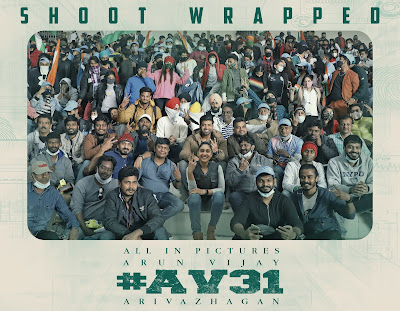 AV 31, supposed to be released in the summer of 2020,suffered a long schedule break due to Lock-down like any other Kollywood film started last year. but the team bounced back swiftly to finish up the project. Arun Vijay is being accompanied by Regina Cassandra, new face steffy patel and Baks Bagavathy in the intense action thriller. The crew kept on sharing sneak-peeks on social media of the sequence shot in the streets of delhi earlier.

The whole team again travelled to Delhi to resume their shoot they left in march. The grand final mega budget schedule of the film happened in a stadium in delhi for a week. Climax fight sequences involved both  Arun Vijay and Regina. Both booted up for breath taking never Done before action sequences . Amidst the freezing cold,  3000 odd junior artists participated in the shoot. Each one of them were allowed only after COVID-19 test .

Arun Vijay, who took extreme risk to support the efforts of the producer and finished the project expressed," I am extremely happy that way the film has come out . It is a team effort to come out and finish the project of this magnitude in these difficult times. I thank my Director and Regina and other co-actors who stood by the movie. I wish this pongal should be a tide changer  for the Film Industry and everyone of us."