It's quite a rarity to see three generations of

It's quite a rarity to see three generations of actors from the same family sharing the screen space together in the Indian film fraternity. It all happens in Kollywood as Veteran actor *Vijaykumar, Arun Vijay* and his son *Arnav Vijay* come together for a film produced by actor Suriya's *2D Entertainment*. 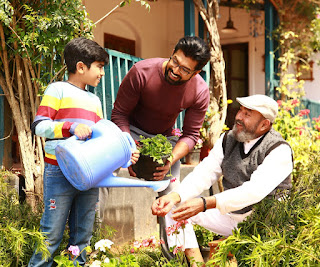 Director Sarov Shanmugam says, "This might look like a stereotypical statement, as I had mentioned the same when Arun Vijay got on board to play Arnav's on-screen dad in this film. And now, it happens with iconic actor Vijaykumar sir as well. I am elated to see actors of three different generations from the same family coming together for a film. Moreover, it unconditionally excites me as it happens through my film. I thank Vijaykumar sir for being a part of this project. Much like Arun Vijay sir, it wasn't easy to convince him. I had to narrate the entire script and the importance of his character. Since it’s a family subject with lots of emotions involved around his character, he agreed to play the respective role.”

This will be Arun Vijay’s 32nd film and will be an out and out kids-centric film with lots of family elements. Shot completely across exquisite locales of Ooty, the film is produced by Suriya for 2D Entertainment and is co-produced by S.R.Ramesh Babu of RB Films & Rajsekar Karpoorasundarapandian. The cinematography is handled by Gopinath, Music by Nivas K Prasanna, Editing by Mega, Production designed by Michael and Costumes by Vinothini Pandian.