Rohan Philem Singh, a cyclist who has been

Rohan Philem Singh, a cyclist who has been conducting cycling campaigns since 2018 for various humane and environmental issues.

Rohan Philem Singh, A cyclist (from Manipur) who has been conducting cycling campaigns since 2018 for various humane and environmental issues, now has come up with another cycling campaign to raise funds to feed the hungry. 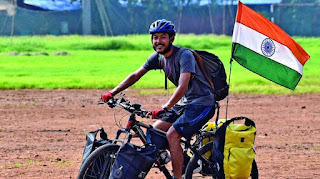 Till now in his previous expeditions, Rohan Philem Singh was able to cycle for about 17,000 kilometers and now plans to travel from Kolkata to Delhi via Chennai and Mumbai or the 'Golden Quadrilateral Route'.

Singh said, "Since 2018, I have been cycling all over India over various issues of humanity and environment under the 'Cycling for Humanity initiative. I have now completed seven expeditions and currently, I am on my 8th expedition. During my previous expeditions, I have covered the distance of 17,000 kilometers across the country. Each and every cycling expedition has been for a cause."

Currently, during his eighth cycling expedition, Singh targets to feed the hungry. "The current expedition is 'Cycling for Humanity- Feed the hungry'. During the lockdown, we have seen people suffering for food, especially the homeless. So that is when we decided to initiate this campaign to feed the hungry and we are now able to feed at least 50 to 60 people every day."