The Nickelodeon franchise entertains millions of young fans across
India and has always created a fun-filled environment for kids. As a leader in the kids’ category, Nickelodeon continues to engage young viewers with initiatives like #YogaSeHiHoga marking the occasion of International Yoga Day. The uniqueness of the campaign is that kids favorite Nicktoons like Motu Patlu, Doggy Don, Rudra, Spongebob and many others are teaching kids to practice yoga to stay physically and mentally healthy.

Through a host of quirky videos and astons on-air, all the Nickelodeon franchise channels- Nick, Sonic, Nick Jr and Nick HD+, has creative communication of the Nicktoons performing various yoga asanas in the most adorable manner. 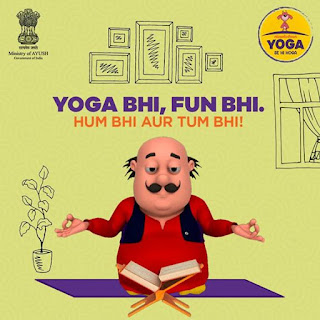 One can see Motu doing the Tadasana to
Spongebob doing the Vrikshasana, encouraging kids to do the same and share their pictures or videos. The campaign is brought to life on social media with a #YogaSeHiHoga social media challenge and a lot of fun short form videos.

The challenge aims at encouraging kids to imbibe  yoga in their daily routine which would help them stay fit physically as well as mentally. All kids must do is watch their favorite toons perform the yoga asanas on the channels and share a picture or a video of them doing the same on nickindia.com and the best entries would get featured on the channel. To reach out to as many kids as possible, Nickelodeon has collaborated with one of the fastest growing influencer community on facebook like Unimo Mom and dad with interactive Yoga sessions planned along with other key mommy bloggers.

With the endearing Nicktoons leading the way, thousands of entries from young fans have poured in! 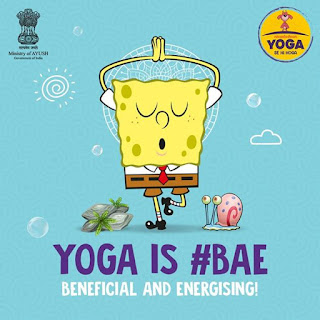 Last year, the campaign #YogaSeHiHoga saw Motu and Patlu perform yoga with Prime Minster Narendra Modi along with 40,000 people at Prabhat Tara Ground to promote the importance of healthy living. The initiative was applauded by the Prime Minister on his official social accounts.

In addition to this, the brand also partnered with Mumbai’s biggest Yoga event – ‘Yoga by the
Bay’ which was attended by over 10,000 yogis with Nicktoons Shiva and Rudra in attendance.

Commending the initiative, P.N. Ranjit Kumar, Joint Secretary, Ministry of AYUSH, said, &quot; As the world goes through tough times, communication houses including TV channels have a special responsibility to the society. They are the ones who are constantly in touch with the people, and engage with their thoughts, and hence they have the opportunity to usher in optimism. The Ministry of AYUSH is glad that Nickelodeon is packing Yoga into their content since the current health emergency is the right time to highlight Yoga in view of its rewards in the form of immunity enhancement and stress relief.

As part of proliferating the campaign, the brand also collaborated with mommy networks and
child celebrities Ruhanika Dhawan, Aakriti Sharma, Myra Singh Gill, to name a few, to come
forward and participate in the challenge and further extend support to the initiative. Speaking on the initiative, Ruhanika Dhawan, said, “I have been practicing Yoga especially after we were
asked to stay home and doing everything necessary to stay strong and healthy. Apart from
strengthening immunity, Yoga also helps me increase my concentration and memory power. I
strongly believe the initiative of Nickelodeon Yoga Se hi Hoga!”

Expressing her delight, Myra Singh Gill said, “Yoga is an important part of my life as it helps in relaxing my mind and be more creative. I am happy to be a part of the initiative undertaken by Nickelodeon for Yoga Day of building stronger immune system. I promise to encourage my
family and my friends to do so as practicing yoga each day has a lot of benefits.”

Commenting on the initiative, Aakriti Sharma said, “As we all continue to stay at home, it has
become important to do any form of physical activity to stay active and happy. I have been
meditating every day and practicing yoga everyday with my family and encourage my friends
too. It helps increase my attention and feel relaxed.”

The franchise is extensively promoting the campaign on-air and on digital with promos and
through an array of activities to drive awareness on the importance of Yoga.
Posted by PadmaSabari at 06:24