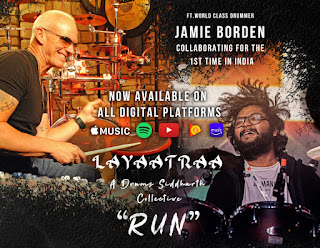 The land of Tamil Nadu has been gifted with plenty of young talents, who have carved a niche of excellence in the world of art and music on global platforms. Time and again, many such young wizards are bringing forth more acclaims to our land, and Chennai based drummer Siddharth Nagarajan is the latest one to join the league. He became the cynosure of global musical panorama by creating a new Guinness World Record for playing the most number of drumbeats in a minute (2109 BPM). Of course, this makes him the “World’s Fastest Drummer” in addition to his 7 records (both National & International) that he holds including ‘Balshree Recipient’ (Padmashree Equivalent for Children). What’s more intriguing is Siddarth Nagarajan being acclaimed as one of the seven geniuses in the world by the National Geographic channel. Now, the music artist has started a new journey - “Layaatraa” , that explores different musical genres and musicians. It’s a fusion of world music series of songs with the seasoning of Indian flavors, where each song will feature a renowned musician across the world.

“The first song in this series is "RUN" featuring a world-renowned legendary Drummer "Jamie Borden" from LAS VEGAS, USA.

"He was a role model for me from my childhood and getting to feature him in my composition is dream come true for me... It was a unique idea to do this because it was a drummer featuring another drummer and I would claim this experience of working with him as one of the ever cherishing moments in my life. This song has some thriller grooves and a drum faceoff in the middle venturing into different rhythmic interpretations on different instruments,” says Siddharth Nagarajan, who hails from a family of musicians. His father Nagi is a renowned percussionist and rhythm programmer working and performing with many music directors in the industry including the maestro Ilayaraja sir. His mother Vidya Nagi is a singer/ vocal instructor.

Currently, Siddharth is playing the drums for multiple artists globally and composing and producing his own music which is available online on renowned platforms like Spotify, Apple Music, etc
Posted by PadmaSabari at 17:56