Beverage brand Mountain Dew is all set to salute India’s resilient spirit this Independence Day with a rendition of the timeless anthem of patriotism, ‘Yeh Desh Hai Veer Jawaano Ka’ from Saregama. Mountain Dew’s take on the powerful anthem has been composed by music producer/composer Ram Sampath, and features soul stirring vocals from Bollywood singer Sukhwinder Singh. The lyrics of the rendition, written by renowned lyricist Swanand Kirkire, reiterate the brand philosophy of Darr Ke Aage Jeet Hai® and salutes the nation’s spirit of emerging victorious in the face of fear.

Set to the lyrics, “Yeh Desh Hai Veer Jawaano Ka, Albelo ka Mastano ka, Yahan Sadiyon Se Ye Reet Hai Ji, Har Darr Ke Aage Jeet Hai Ji”, the video features stills of some of independent India’s most defining moments be it the  1983 cricket world cup, the launch of the homegrown Mangalyaan, A.R Rahman’s Oscar win or the bravado of the real heroes facing the current times - all of which are testimony to the resilience of India and a reminder on how we will be victorious again and come out of the challenging times we are facing today. 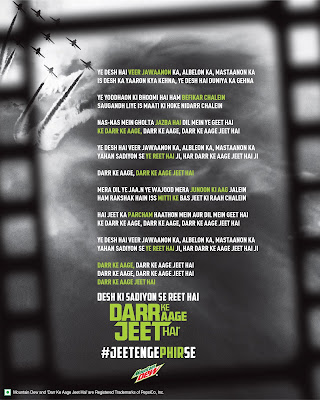 Talking about the new anthem, Naseeb Puri, Director, Mountain Dew & Energy, PepsiCo India says, “India’s collective resilience has enabled our nation to achieve victory in the face of fear time and again. This Independence Day, we salute this very spirit of being courageous and overcoming fear, a philosophy that Mountain Dew has always stood for. The Darr ke Aage Jeet Hai ® anthem is our ode to the spirit of 1.38 billion Indians and we are delighted to have partners such as Saregama, Sukhwinder Singh, Ram Sampath, Wunderman Thompson and Swanand Kirkire on board to help us take our message across the country. The lyrics of the anthem aim to inspire the nation and ignite the self-belief that we will emerge victorious from these trying times.”

Bollywood Singer Sukhwinder Singh said, “I am happy to associate with Mountain Dew for this special anthem on Independence Day. People are looking for strength and inspiration at this time and a classic  from Saregama like ‘Yeh Desh Hai Veer Jawaano Ka’ along with brilliant composition by Ram Sampath, with a twist is sure to give people the strength to move forward and overcome their fears. I am thrilled to be lending my voice for this energetic track, Darr Ke Aage Jeet Hai’®.”

Harsh Maheshwari, Executive Creative Director, Wunderman Thompson said, “Now more than ever India’s legendary legacy of winning against all odds can inspire us and lift our spirits. That was the idea to create an anthem that reminds us all – Darr Ke Aage Jeet Thi, Darr Ke  Aage Jeet Hai.”


The anthem will be released through a 360-degree marketing campaign spanning television, digital, music platforms and social media.
Posted by PadmaSabari at 08:02