Arun Vijay starrer ‘Sinam’ is produced by R. Vijayakumar of Movie Slides Pvt Ltd and is directed by

Arun Vijay starrer ‘Sinam’ is produced by R. Vijayakumar of Movie Slides Pvt Ltd and is directed by GNR. Kumaravelan. Pallak Lalwani, Kaali Venkat, RNR Manohar, KSG Venkatesh, Marumalarchi Bharathi & others are among the star-cast. The film has musical score by Shabir Tabare Alam and cinematography handled by Gopinath. With the movie hitting screens worldwide on September 16, 2022, the movie audio launch was held in Chennai.

Here are some of the excerpts from this occasion. 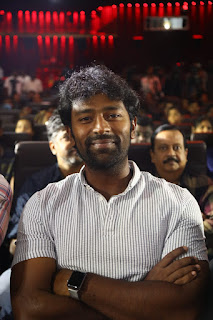 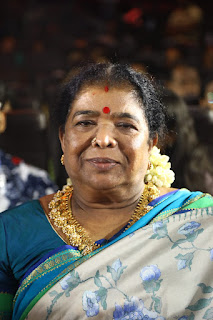 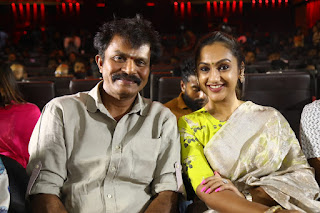 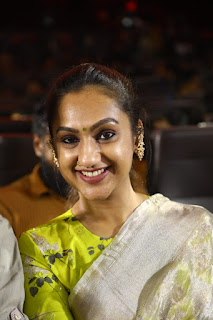 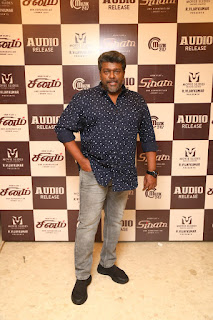 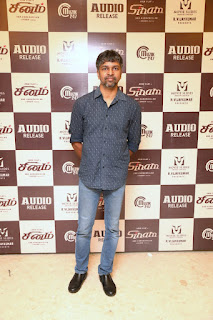 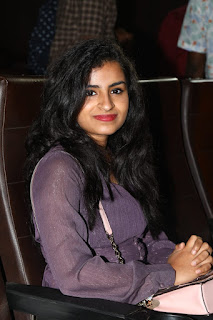 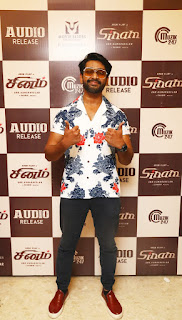 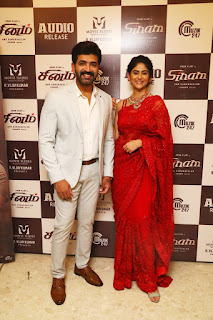 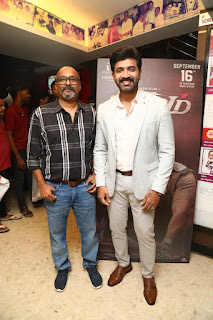 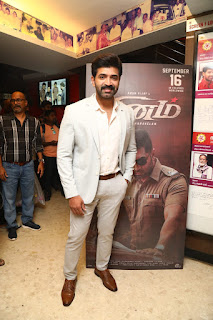 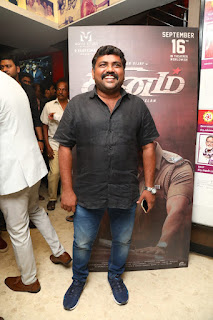 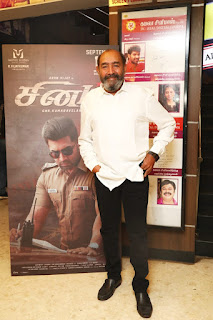 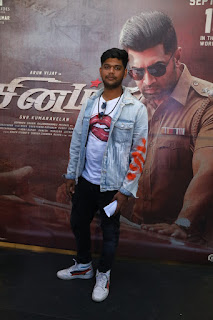 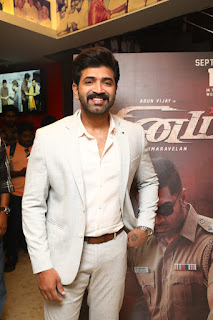 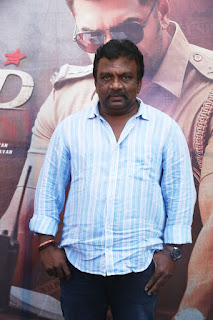 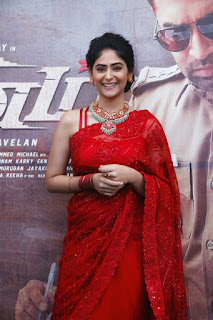 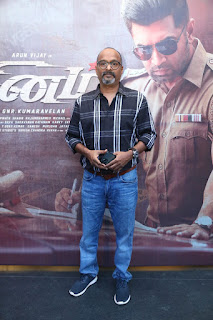 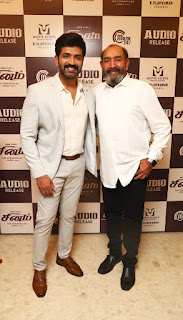 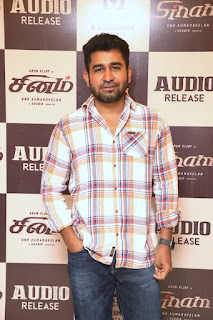 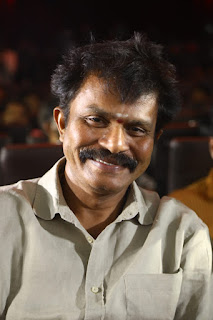 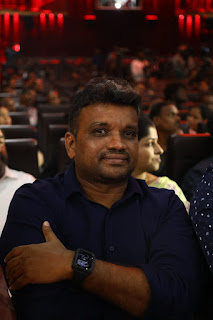 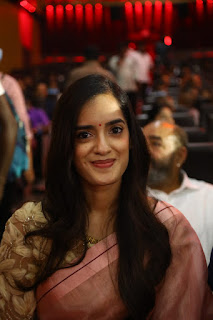 Actor Arun Vijay said, “Just like Kumaravelan sir said, I wanted Sinam movie to be released in the theaters. When I listened to the script, I clearly felt that it’s a movie made for you all. I thank Kumaravelan sir for creating Paari Velan role for me. I have donned the police role in the past with Kuttram 23, but this one will be different. It has emotional and realistic approach to every character. I have underplayed throughout the movie, and it will be different from my previous ones. I thank my father for being supportive throughout the movie’s production. Without his support, this project would have not achieved the final output it has gained now. I thank the entire technical team for a lovely support. They together have shaped the movie with such excellence. I have always loved Shabir’s works. He has done a fabulous work with not just songs, but re-recording as well. The movie will be related by all the audiences as they’ll find a deep connection and they’ll surely like it.”

Producer Vijay Kumar said, “Everyone is saying that I am the producer of this movie, but it’s Arun Vijay, and I am just a production manager. Everyone in the team have been a family, and have contributed a lot towards the film’s best output. I thank all the well-wishers like Vijay Antony for patiently attending the entire event. Music Director Shabir will become a great musical icon in the industry. Kumaravelan sir has done a remarkable job, and his assistant directors have worked hard. Heroine Pallak is the main attraction in this movie as she befittingly looks perfect as a South Indian actress. I wish the entire team for the grand success of this movie. I thank everyone for wishing the best for success of this movie. I request you all to watch the movie on September 16, and support it.”

Filmmaker GNR Kumaravelan said, “After watching my Haridas movie, Arun Vijay sir told me that both of us should work together. Later we got busy with our projects. After the disastrous result of Wagah, I realized my strength and shortcomings as my father instructed me. He told me that I am good in emotions, and told me to make movies based on this theme. This helped me to develop the project ‘Sinam’ with the debut story of Sathish, a police writer. After 6 months of script work, I approached Arun Vijay sir. He never considered my previous work’s failure, but instead, understood my potential and decided to produce the movie himself along with his father. Although I was happy, there was a kind of huge responsibility as Vijay Kumar has 50 years of experience in the industry. While nearing the completion, pandemic left a bad impact on everyone. During this time, Arun Vijay sir got a big OTT offer. Although I wanted the movie for a theatrical release, I had no options, but as a well-wisher asked me to go ahead. But then, He understood my desire, and gave the word that Sinam will be a theatrical release. He is a man of word, and has kept up his promise enabling theatrical release now. I thank the entire team for being a great support in materializing this movie. I can assure you all that Sinam will be a movie for all.”

Actress Pallak Lalwani said, “Everyone asks me how do I work in Tamil movies without knowing the language. Emotions have no language, and this movie has it in plenty. There is a good message in this movie. I thank producers Vijay Kumar sir, Arun Vijay sir and director Kumaravelan sir for giving me great support. I am really happy with my character Madhangi has shaped up. I request you all to watch the movie in the theaters, and you’ll like it.”

Stunt Silva said, “Since Arun Vijay is an action-packed hero, don’t assume this to be an action-thriller. This is a beautiful and emotional family entertainer laced with sentiments and emotions, and action factors will be one of the elements. I am glad that the family members of Arun Vijay sir shared their first feedback over my contribution to this movie. Whenever I get onboard for AV sir movies, we would start rehearsing with stunt team, three months prior to the shooting. I am sure everyone will like this movie.”

Cinematographer Gopi said, “This is my fourth movie with Arun and it has come out really well. I request everyone to watch this movie and support it.”

Actor Kaali Venkat said, “I am grateful to the production team for being such a great support to me during the crucial times in COVID-19 time. The whole process of working in the movie ‘Sinam’ was great. Working with Arun Vijay sir and GNR Kumaravelan sir was so much amazing. Like everyone said, Sinam is a movie that will cater the tastes of family audiences, and I request you all to watch this movie in the theaters and support it.”

Music Director Shabir said, “Being far away from our Tamil Land, I always have special affinity for Tamil language. I make sure that the essence of Tamil is completely present there in the songs. There are four songs in the movie ‘Sinam’, and I am glad that it has garnered good welcome soon. When Arun Vijay sir walked into the studio for recording a song with such a stunning voice, there was a standing ovation there. Director GNR Kumaravelan is a prodigious filmmaker. Sinam (anger) always gives more space to express in it art form. I thank Kumaravelan sir for giving this opportunity to me.”

Actor Radhakrishnan Parthiban said, “Arun Vijay isn’t just a handsome actor, but a hardworking personality. In spite of his father Vijay Kumar being a part of industry, he didn’t get go through the recommendations. He had to wait patiently for years to have his breakthrough. I am really happy with the way; Arun Vijay performed a song here. The trailer is scintillating. I am sure many real life police officers will envy him for being a handsome cop. I wish the entire team for the grand success of this movie.”

Director Arivazhagan said, “Everyone knows Arun Vijay sir as a good actor, but I have witnessed his caliber as a producer while working in the movie Kuttram 23. His involvement was extraordinary. I am great to see him produce a good quality content with his father Vijay Kumar sir in this movie ‘Sinam’, which is evident with the trailer. GNR Kumaravelan sir is a great filmmaker, and his colossal work was evident through the movie ‘Haridas’. The entire team looks promising with their works.

Actor Vijay Antony said, “I got an opportunity to share the screen with Arun Vijay sir in Agni Siragugal. I was awestruck with his top-notch performance. He will surely scale greater heights with his futuristic projects. The way, he rendered a song gave a similar impact of Kamal Haasan sir’s work in ‘Kadavul Paathi Mirugam Paathi’ from Aalavandhan. I am here at the event for a couple of people – One for Arun Vijay sir and another one is filmmaker GNR Kumaravelan sir. I have worked as music director for his three movies. He is a good human. I will be watching the First Day First Show of this movie, and I request everyone to watch it in the theaters on September 16.”

Actor Prasanna said, “Much alike others, I have also come here to attend this event for the sake of Arun Vijay sir. I love him a lot and admire his works. Both I and Sneha are always happy with the works made by Kumaravelan sir. The songs by music director Shabir have good depth. Kaali Venkat is a fabulous actor, who doesn’t score brownie points with comedy roles, but delivers extraordinary spell in any given characters.”

Director Magizh Thirumeni said, “Arun Vijay sir is a multi-faceted actor, who can deliver any roles with an ease. Be it comedy, action, romantic, emotional or whatever character, he leaves us enthralled. This function is special for me. Shabir has delivered beautiful songs for this movie. Kaali Venkat is a talented actor, and he is going to touch greater heights. The entire crew has done a beautiful work, and I am sure the movie is going to garnered phenomenal response.”

Actor Shanthnu Bhagyaraj said, “When I get motivated by anyone in the industry or public, they always refer Arun Vijay sir. He has crossed so many hurdles and criticisms to create a successful domain for him. Even actor Vijay sir encouraged me stating that if he went through same hurdles during the early stage of his career and even Arun Vijay, who after many years of challenges has set a new market for him. I thank the entire team for the grand success of this movie.”

Director Hari said, “The Trailer looks amazing loaded with emotional essence and the songs by Shabir are too good. I am so happy to see my father-in-law Vijay Kumar producing a movie after many years. Today, everyone likes movies with emotional contents and I am confident that Sinam is going to witness grand success. I wish the entire team and everyone in trade circle for the great success of this movie.”

Cinematographer Balasubramaniem said, “Kumaravelan sir is a talented filmmaker, and his creative approach for pictures he clicks on mobile itself is amazing. So just imagine the output of the movies he makes. Arun Vijay sir is a dedicated artiste, and I can see that he has delivered a tremendous acting in this movie. I wish the entire team for the success of this movie.”

Producer T Siva said, “I could experience the feel of Kamal sir movie in Sinam as Arun Vijay rendered the song. Being the student of Kamal sir, Kumaravelan has done a great job. Arun Vijay is a fabulous actor. This movie is going to be a great hit for Kumaravelan sir. I have more confidence over the film’s success. If this movie becomes hit, it will be an additional attraction for my production ‘Agni Siragugal’ that will release in November.