Here is the latest and hottest talk of the town!*

*Here is the latest and hottest talk of the town!*

The rising star *Santhanam's* *"Biscoth"* film is getting released for this Diwali!! Mr. Santhanam has played 3 unique roles in the movie to make the syllabled festival more entertaining. 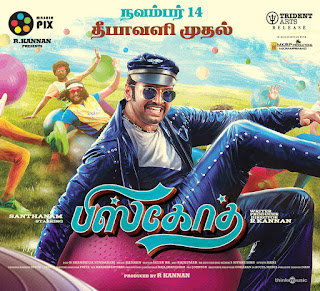 The movie is directed by Mr. R. Kannan.

Out of the 3 roles played by the hero, one turns out to be a rajput, the scenes of which covers nearly 30 minutes of the film. Those scenes were shot in Ramojirao Film City in sets of Mr. Rajkumar, the Art Director.

From the speech of the captain of the ship, it was noted that the film is named *'Biscoth'* after the biscuit factory which has played an important role in the movie.

Many unseen shades of Santhanam has been revealed in the movie. The director claims that this movie is gonna be a game changing film in Santhanam’s career just like *'Imsai Arasan'* for the legendary comedian *Mr.Vadivelu*.

The costume designer of the film, Ms. Priya has strived a lot to desgin the costumes for the monarchial part of the movie. More than 500 co-stars have acted in the  monarchial scenes.

The movie has been divided into three parts. Out of which, one potrays the 18th century, another depicts the ever-golden 1980s and the last part screenplays the present time - 2020.

The connection between the three parts is conveyed with lopst of comedy and masala by making the movie a super-amusing package.

Not only for Santhanam's fans, the movie is gonna be a delightful treat for the entire crowd.

The director assures that this film will turn out to be the stress burster of this corona period and lits the candle of peace in everyone's heart!

The level of cooperation received from Mr. Santhanam for this movie is incredible. He has learnt the art of 'Kalari' from Mr. Harithineshi, Stunt Master, for the stunt scenes of the film.

The legendary actress Mrs. Sowcar Janaki has acted as grandmother of the male lead and ruled the comedy scenes.

The director has joined hands with *MKRP productions* in place of masala pics and has also produced the film.

See you all soon on diwali !!