The craziest combination of Vishnu Manchu and Sreenu Vaitla is back after 13 years. Sequel for their film Dhee is coming and it is titled D & D with the tagline Double Dose. D & D is announced officially today on the occasion of Vishnu’s birthday. 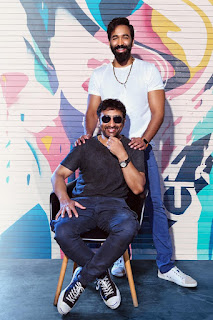 The title is designed as handcuffs and it looks remarkable. By giving the tagline of Double Dose, the makers assure double dose of action and comedy than the first film in Dhee franchise.

Vishnu Manchu himself will be producing the film on 24 Frames Factory, while Avaram Bhakta Manchu presents it. Sreenu Vaitla’s favorite writer Gopi Mohan who was part of the director’s several blockbusters including Dhee is working as script writer along with another popular writer Kishore Gopu.

India’s number one action choreographer Peter Hein is roped in as the film will be high on action.

MR Varma is the editor and Chinna will supervise art department.

Heroine and other details will be revealed soon.